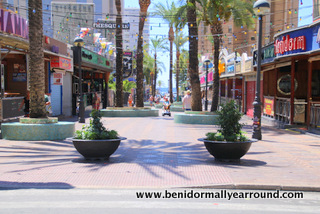 Following the devastating terrorist attack on Barcelona, many Spanish towns and cities reassessed their own security precautions – and Benidorm was no exception. Sadly driving vehicles down pedestrianized routes appear to be a favoured method of extremists and in response large heavy planters were positioned at many busy areas around the resort, including The Square which is particularly popular with the Brits. 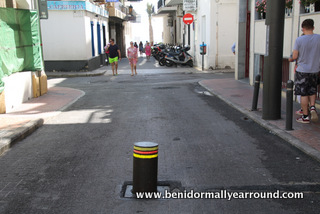 Other places have automatic rising bollards in the road, such as the junction of Calle Ruzafa and the beginning of the walking street and on many roads in the Old Town. Access is only available to residents and has to be verified via an intercom system. 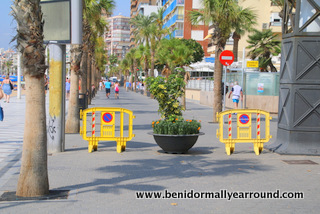 The Levante promenade has been a particular problem and the police have now requested that vehicular access is even further restricted, presenting a proposal to the town hall. The number of cars and vans that drive down the front is remarkable, dodging holidaymakers walking along the road. Most are totally oblivious, thinking it is a pedestrianized route and startled when beeped to move out of the way. 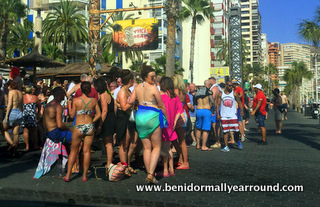 The crowds outside bars such as Tiki Beach, who spill out onto the road are a real hazard for drivers to contend with. It is impossible to completely ban all vehicles – bars and restaurants need deliveries and the many blocks of apartments along the front line have garage access from the front. However, currently a vehicle can drive all the way from one end, by the tourist information office at the very end of the Levante in the Old Town to the cable ski end by McDonald's, in the Rincon. 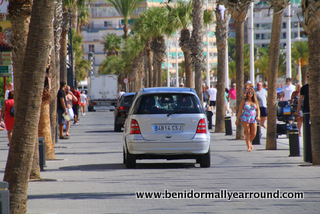 The police have asked that residents can only drive around their own block, therefore some streets between the promenade and Avd Mediterraneo may need the flow of traffic reversed to accommodate this. It will mean that they can only have access to the promenade directly in front of their own block, which is normally where the garage entrance is and in theory a good idea. 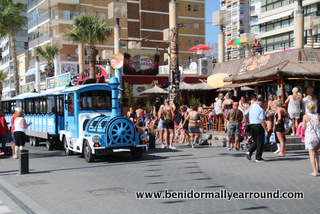 Whether they decide to place the automatic rising bollards along the front is not known, but the danger with these is if an emergency vehicle needs to get past quickly, would it hinder their access… and what of the tourist train, that trundles along the promenade? 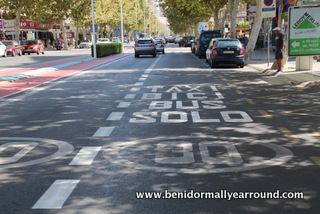 But diverting traffic onto the main Avd Mediterraneo has its own problems – namely the newly installed bus/taxi/bike lane in addition to the other red bike lane running along the central reservation. Cars now have only one lane to use and opposition parties are challenging this decision as it was only meant to be a trial.