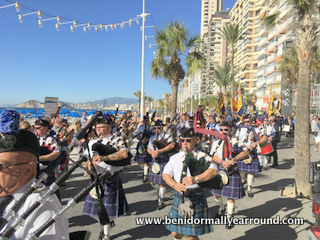 The 2017 Poppy Appeal Launch took place in Benidorm today – to much pomp and ceremony as it rightly deserves. The wonderful sound of the Torrevieja Pipes and Drums headed the parade, which certainly attracted everyone’s attention along the Levante promenade. 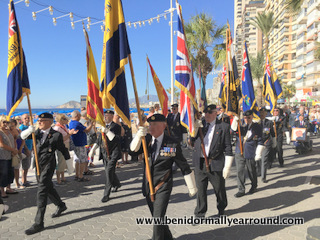 Then followed the immaculately turned out Standard Bearers and behind them, probably the real stars of the event – Arthur ‘Skippy’ Teasdale and Wayne Campbell, the two Chelsea Pensioners in their distinctive scarlet coats and medals who come over specially for this prestigious occasion every year… and it is a real honour and privilege to have them here. 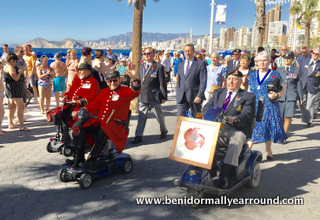 The route was lined with locals and holidaymakers, who cheered and clapped their respect for all the veterans as they passed and behind them the Mayor, Toni Perez alongside Una Clemenson - National Vice Chairman RBL, Don Cubbon – Chairman RBL District North Spain, Pamela Dawson-Tasker – Branch Secretary and Elizabeth Bell – British Vice Consul. After the short parade came the official part, with speeches by RBL representatives and the Mayor. 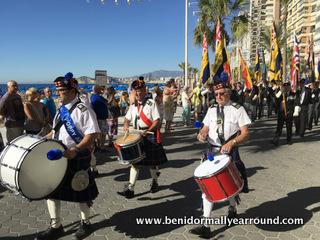 You will see numerous businesses around here with boxes of poppies, from bars and restaurants to shops – the Royal British legion spends £1.3 million each week to assist the Armed Forces Community. By making a donation for your poppy you are supporting those who have dedicated their lives to serving their country. 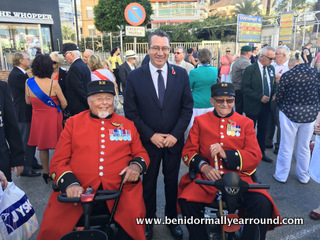 Last years poppy appeal here in Spain raised €165,245.86, an incredible amount – in 2002 it was €23,000! Every year is a challenge to raise more, especially in the current financial climate but be assured that every single cent is spent on beneficiaries, be they serving men and women, veterans or their families. 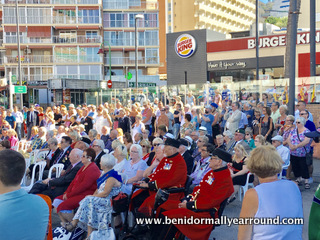 Here in Spain they have helped furnish accommodation, financed mobility scooters and installed chair lifts and given immediate needs grants for food, repairs and essential bills by way of support. The work of the Legion is as relevant and vital today as it was in the aftermath of the First World War when the charity was founded. 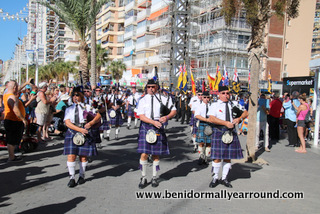 The Armed Forces community lives all around us and the Legion’s support happens in unexpected ways in unexpected places. Wear your Poppy with Pride and give generously to help the charity’s continuing welfare work, helping support those that have fought in all the conflicts worldwide