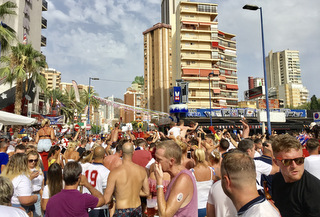 Following the mayhem that took place on Calle Gerona last Saturday, when England earned their place in the World Cup semi finals, a security meeting was organised this morning by the Councilor for Security, Lorenzo Martinez and chiefs from both the Local and National Police. Afterwards a second meeting, involving owners and managers of bars along Calle Gerona took place. 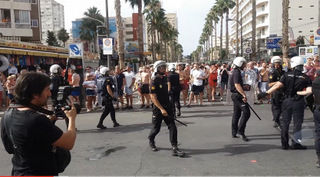 What started out as joyous scenes of fans chanting and singing soon turn anything but, after video footage emerged on social media and the UK press of National Police hitting British fans with their batons despite no obvious sign of any trouble. 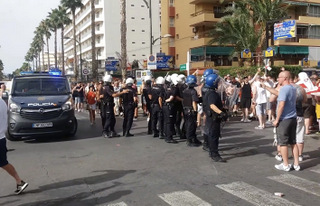 Many have criticised the police of their heavy-handed action and not wanting a repeat this special meeting was called ahead of the clash between Croatia.There has been much debate on social media and many Spanish televison stations have been running programs discussing the incidence, with opinion split over police tactics. 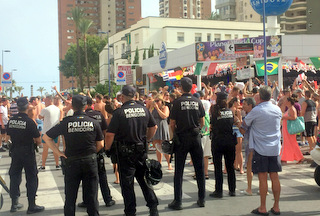 Around 100 police officers, including specially trained riot police will be deployed along Calle Gerona and the street will be cut to traffic ten minutes before the final whistle, from Morgans Tavern down to Avd Europa and all approach roads to allow fans to disperse safely.

Bars have been asked to serve drinks in plastic glasses and where feasible and to remove items that may be thrown, such as tables and chairs. Bottle recycling bins will also be removed from the street. They have been requested to use the sound systems to dissuade fans from causing any trouble and to avoid obstructing the street, heading back to their hotels in an organised manner. 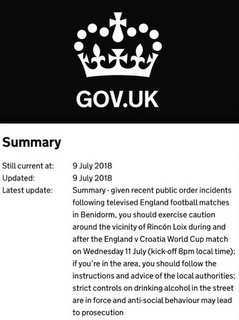 The UK Foreign Office has also issued an update ahead of the game warning fans to exercise caution and to follow the instructions and advice of the local authorities "Given recent public order incidents following televised England football matches in Benidorm, you should exercise caution around the vicinity of Rincon Loix during and after the England v Croatia World Cup match on Wednesday 11 July 9kick off 8pm local time). If you're in the area, you should follow the instruction and advice of the local authorities. Strict control on drinking alcohol in the street are in force and anti-social behaviour may lead to prosecution" 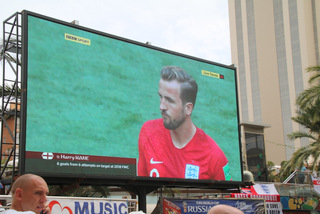 Tourism is vital to Benidorm's economy and it's a balancing act to keep everyone happy. The reputation of the resort had undoubtedly been tarnished from the actions of the minority of English fans last weekend - but it's not only here. Scenes of emergency vehicles being damaged in the UK by so called fans has shocked the nation. Please be responsible in your celebrations!

0 #3 Collin Smith 2018-07-10 20:03
Football fans getting targeted again for a couple of small incidents, meanwhile.....t hey do feck all about the "pickpockets, hookers and bouncers who are battering holiday makers".
Quote
0 #2 Suzy Bluer 2018-07-10 18:43
Pubs advised to remove things that can be thrown but the only people throwing was the police throwing their weight about! (Hitting fans with batons) just cos Spain’s gone home don’t take it out on English people..... it’s coming home!
Quote
0 #1 Kevin Murphy 2018-07-10 18:43
There was no trouble till the police started pushing people about
Quote
Refresh comments list