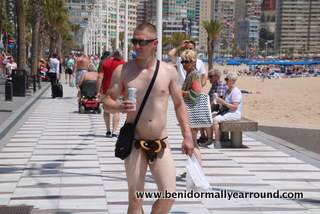 Fed up with the negative image being portrayed of the resort, councilors have voted in favour of requesting an amendment of the law on anti social behaviour to the Provincial Government in Valencia. Currently, the Local Police can in theory issue fines, although in reality it is doubtful whether any are actually ever issued. 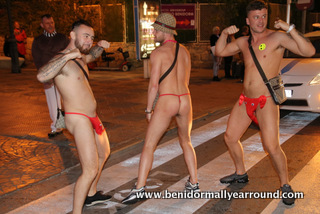 Those that are, are in the main ignored and left unpaid once the offender has returned back home. They appear to be requesting an order that would enable the Spanish authorities the power to chase up unpaid fines in the UK. 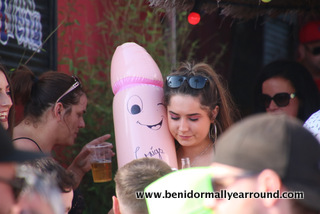 Councilor for Security Lorenzo Martinez said that the situation is not “alarming” considering the numbers that come here, but for that small minority that misbehave it is better to have a pertinent and effective deterrent.
However, quite how easy will it be to police as what one person finds offensive is ok by another. 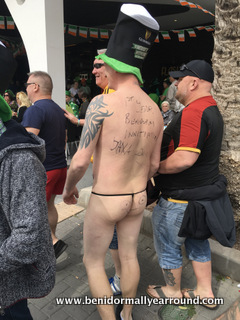 Party groups are really the prime targets here – a semi naked thong wearing stag walking down the Levante promenade on a Saturday is certainly not unusual here – but in front of families with young children really isn’t appropriate. Would they be given a warning to cover up first?

Hens, with the bride-to-be carrying a giant blow up appendage is another example although most just wear printed t-shirts with dates and names… probably the safest option! 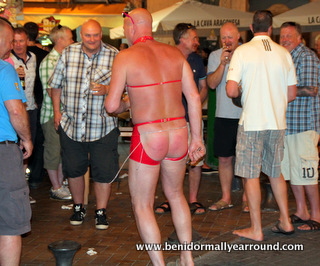 The authorities just need to think carefully as these groups are important to the economy and many bars here survive purely because of them. Perhaps a stern warning would be adequate? Don’t kill the goose that lays the golden egg springs to mind although in all honesty, some of them, their behaviour and subsequent press headlines we could do without.

12
+1 #16 tebo53 2018-08-05 09:42
Use common sense while here in Benidorm and you will have a wonderful time. If you see the Pea men just walk on by and they won't bother you. Enjoy yourselves here.
Quote
-1 #15 Carlos MP 2018-08-01 22:09
Richard Hamilton I’m not calling nobody in particular stupid. I’m just saying that nobody points a gun at you to give 50€ from your wallet to bet against them. Technically they are not robbing you, and it will be impossible to prove it’s a scam (the pea never appears where you choose). Isn’t suspicious that the ones that always win have the same skin color than the pea move)? Actually they work as bait. But I insist that local police should do more. I have myself reported the police several times whenever I see them. But they get alerted by vigilants and quickly leave. It’s a problem hard to solve. If they get arrested they are soon released since the amount scammed is often less than 400€.
Quote
0 #14 Grace McKeown 2018-08-01 22:09
We always go to benidorm. ..brilliant. resort.. whatever the age. .no. my daughter's go with their family. ..see you there September. ..xx
Quote
0 #13 David Yapp 2018-08-01 22:08
I always remember, on my very trip to Benidorm in 2010 staying at Riudor. There was a poster outside of the lift that warned you to avoid the pea men. I've never seen any other warning anywhere else. All hotels, bars, clubs should do this
Quote
+1 #12 Richard Hamilton 2018-08-01 22:07
Carlos MP what if she's not stupid. What about the elderly and vulnerable people that get dupped by the peamen?
Quote
+1 #11 Elizabeth Izzy Mcfal 2018-08-01 07:31
Stephen Edwards wow . wot a completely stupid silly remark. i am no prude - not by a long shot - & i love a bit of craic, but this is not fun - this is jus vile & disgusting. As Tom has said, Benidorm is not just 4 the likes of these cretons - its 4 everyone - families etc etc - & if uve no respect 4 urself, the country ur in or the families that frequent it then id say dont go 2 Benidorm. these r the prats that r ruining it big style. Decency has gone out the window unfortunately
Quote
0 #10 Carlos MP 2018-08-01 07:31
If you get robbed by pea mean you are stupid and don’t even deserve to holiday, it’s that plain and simple. Anyway, I wish local police would do sth about it now and for all
Quote
+1 #9 Bobby Johnston 2018-08-01 04:10
Quoting Denise Campbell:

Never mind that. What about the illegal migrants or so called pea men who rob tourists day and daily? It’s about time we all holidayed in a different country. That would wake the local councillors up. Getting to the Caribbean is now cheaper then going to Benidorm. Remember Turkey, Egypt, Tunisia etc are all now open for business Benidorm.

Missing you already , So you advocate we stay away from Benidorm, Let all the bar and other owners go bankrupt staff, waiters , cleaners get paid off well sorry we don't think so , Personaly I have been comming to Benidorm since 1968 I've never been offerd drugs, been robbed ,or got into a fight I'm not saying shit doesent happen it does but I bet worce things happen in most towns right across the UK every week,
Quote
+1 #8 Tom Hope 2018-07-31 22:26
Quoting Denise Campbell:

Never mind that. What about the illegal migrants or so called pea men who rob tourists day and daily? It’s about time we all holidayed in a different country. That would wake the local councillors up. Getting to the Caribbean is now cheaper then going to Benidorm. Remember Turkey, Egypt, Tunisia etc are all now open for business Benidorm.

Crack on then, deffo won’t miss you. If you want to spend your money where they have very dubious human rights then feel free.
Quote
0 #7 Tom Hope 2018-07-31 22:20
Stephen Edwards Benidorm isn’t just for the likes of you, Divn’t forget that......
Quote
12
Refresh comments list