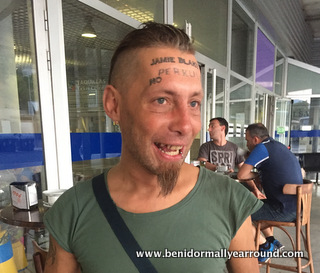 Tomek, the homeless Polish man, hit headlines nationally and internationally after being the victim of a British stag in Benidorm, who paid Tomek €100 to have a name tattooed on his forehead. There was an outcry from people worldwide that a vulnerable man had been totally taken advantage of. This incident actually happened mid May and Tomek then took off to Granada, where he had friends in the hope of some kind of recovery. 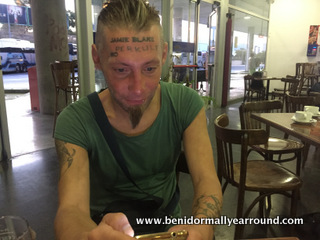 An interview with the stag in question by the British press had him claim that Tomek was a friend of a friend, who lived and worked here in Benidorm. He also claimed that he wasn’t even at the tattoo parlour when this happened, but Tomek strenuously denies his version of events.

Sadly, Tomek is a vulnerable man – he admits to being an alcoholic and sleeping on the streets. Tomek was approached by the stag whilst sat on the pavement, drunk, outside KFC on Calle Gerona, begging passersby for some spare change. The stag, also drunk told Tomek that he would give him €100 if he had a tattoo done on his forehead, which for a homeless person was an absolute fortune – so without hesitation agreed. They walked done Avd Fillipinas together and entered the tattoo parlour where the artist was paid €30 to inscribe the name “Jamie Blake” and underneath “North Shields N28”. Now all the press have stated that Jamie was the stags name – IT WAS NOT. Jamie was the name of his fiancée! 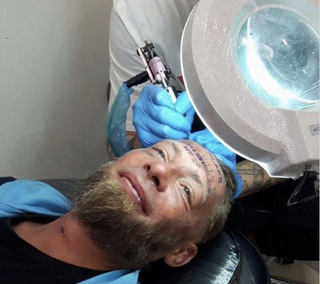 The inking started and the name was completed but only the letters NO of North was completed as Tomek was in so much pain and told him to stop. Prior to this Tomek had been attacked sleeping on the Levante beach, where he was robbed of the few euros he had to his name, his passports and documents and had his throat slashed, so to be offered €100 was the answer to his prayers. 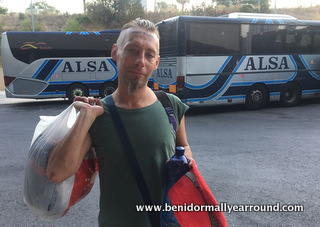 He was made aware of the media coverage and outrage it had caused and was overcome with emotion to see that the British community had been so generous with help. He took the overnight bus from Granada and arrived in Benidorm at 5:15am this morning to be met by myself and Karen Maling-Cowles, President of Benidorm’s British Business Association with his meager possessions in a carrier bag.

The tattoo studio that carried out this controversial inking is not a British run one. Initially they were obviously proud of their achievement as they posted a picture of Tomek on their Facebook page, but following a barrage of criticism, quickly removed it. The unanimous reaction from the majority of tattooists is that it broke a code of conduct and moral ethics, which they all adhere to and take very seriously. 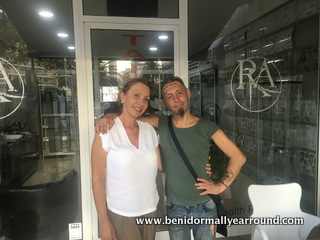 In a bid to turn the situation around, Karen Maling-Cowles of Benidorm’s British Business Association set up a social media fundraising page to collect enough money to have the inking lasered off and for him to receive much needed medical care and seen pictured together with a very happy Tomek this morning. 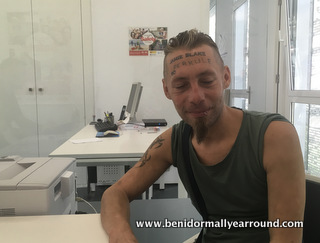 This morning we spent a total of three hours at the SATE office to help him make make a denuncia – an official police complaint against the tattoo shop. This should never have been done as first he was drunk and secondly was an obviously vulnerable man in no fit state of mind. During our time there, the National Police officer in charge of the SATE office took numerous calls from the Councilor of Security, Lorenzo Martinez and other police officials due to the complexity of the situation. 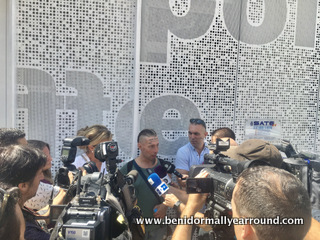 Afterwards, there was a media scrum of Spanish journalists and film crews, who got wind that we were there. After answering their questions, Tomek had some food and is now at Hospital Clinica Benidorm who offered him a FREE full health check. They have also very generously offered to have the forehead inking’s lasered off for FREE when the time is right. 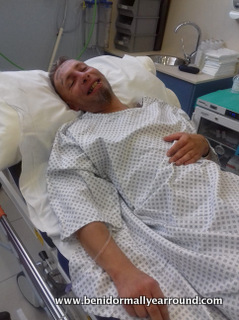 Tomek is literally overcome with emotion at the humanity being shown following such a devastating experience only 2 months previously. He has said that he wants to beat his demons and agreed to enter a rehab program for his drink issues and once on the straight and narrow, get a job. He lived and worked in London for 5 years where he worked in a hotel kitchen and would love to go back to that. He adores cooking – sadly he learnt at a very young age as his mother was unable to look after him and his two bothers as she had a drink issue and one day would love to open up his own Polish restaurant.

The money pledged by so many kind strangers will be used to help him reach his objectives, including a new passport, which has to be done in Madrid. The first step of his future began today and we all wish him well.