Escalation of ATM's in Benidorm 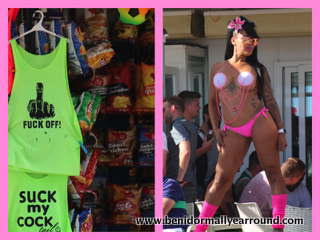 There isn't one specific reason why visitor numbers to Benidorm are dwindling – increased prices and escalating crime are two obvious explanations, but the answer is to find solutions rather than just lay blame. But Live Sex Show posters, gyrating pole dancers and vulgar tee shirts on display during the day certainly do nothing to entice families here – quite the opposite. 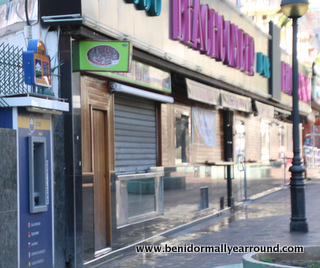 Weekend packages promoted by tour operators that offer cheap alcohol with an anything goes attitude simply encourages bars to compete against each other, giving free shots to entice groups in. However, the rapid increase in ATM machines sprouting up literally everywhere is a worry and simply motivates and spurs on reckless spending. 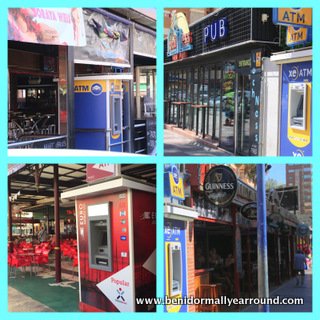 Some are even positioned in bars - Stardust, Broadway – not one but two, Secret Garden, Rose & Crown to name a few ensures that you are never more than a few footsteps away from more cash and more rounds! They are especially prevalent on and around Calle Gerona in the Rincon area, where the Brits tend to go and not so much in the Old Town – targeting and encouraging a specific audience I wonder? 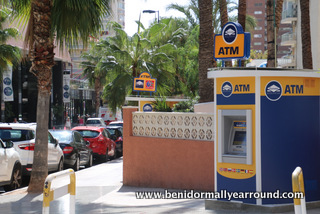 Knowing that many will have cash on them also fuels theft. Check any social media forum regarding Benidorm and one topic is clear – escalating crime and the apparent apathy by the police and authorities to tackle the issue. Pickpockets are certainly commonplace in tourist destinations and Benidorm is no different to Barcelona, Rome and London. 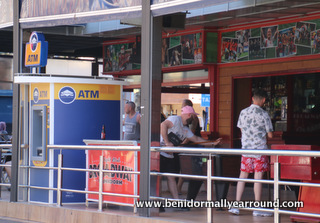 But what is exasperating many are the known gangs of predominantly African girls purporting to be prostitutes who are attacking lone males to steal their wallets and valuables. Many hang out on the steps outside the indoor market, opposite the Hotel Nereo and numerous videos have been posted on social media of the gangs in action, filmed by holidaymakers from their hotel balconies. 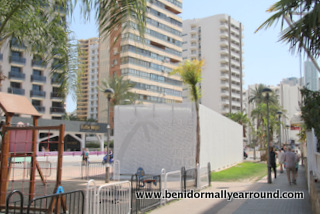 These and in fact any crimes should be reported at the SATE office but bizarrely, the opening hours from October to April are 9:00am until 3:00pm Monday to Friday and completely closed at the weekend! Well that’s certainly one way to ensure that ‘official figures’ quoted by police of crime rates in Benidorm are down year on year.

123
+2 #22 mark 2018-10-16 11:21
Have they not just put a 6% charge on for using ATM machines??? That's 6 quid in a 100. If this is the case then more fool the people that use them and there must be enough of them otherwise they wouldn't do it. People keep on moaning things are getting more expensive and to a degree they are but there are still a few things you can do to save a little and ATM's are one.
Quote
0 #21 Fay Hewad 2018-10-15 21:17
Carl Crompton I understand the not feeling safe at night and yes the police do know who they are, they just cant be bothered as it is too much paperwork dealing with foreigners... I also heard from a local that if you get robbed, it isn't looked into unless it is over 400€.. it used to be less but it was a quick way to get the crime rate down !
Quote
0 #20 Carl Crompton 2018-10-15 21:16
Fay Heward your right but dosent feel as safe as it used to,I definitely wasn't as relaxed late at night outside,tourism is what the area depends on,surley theres cctv all over the place,the police must know who the criminals are,same old bunch,
Quote
+2 #19 Fey Heward 2018-10-15 21:15
I've lived here for the past 12 months and have been here a lot on hols , never seen any trouble la and as for sex shows and the like, I just don't go to those bars when they are on... easy to avoid !! And there are plenty if other places to frequent off the strip... when people moan it's mainly to do with the strip, dont go there , beni is a big place !!
And as for it being quiet, I blame the travel companies for hiking up the prices to come here
Quote
0 #18 Brenda Parker 2018-10-15 10:19
Been going for over 30years 2 to 3 times a year this year 4 but we decided to book Levante Club Hotel Spa all inclusive as we found we were just staying in hotel on a night time due to lack of decent entertainment
Quote
0 #17 Bobby Johnston 2018-10-15 09:24
Auriol Taylorson I totaly agree Benidorm was the best family destination in Europe,
then whoever approved the filth to operate freely and this chased the family's away,
hopfuly Benidorms council catches on and finaly get round to picking the muggers, conmen, prostitutes,
pick pockets and pea men up and sending them back where they came from or locking them up for a very long time.
Quote
0 #16 Stephen Waring 2018-10-15 09:10
Dead right about the police Les HarperHarper..I ts like they continuously turn a blind eye to these criminals knowing where they all hang, My friend who has a bar in the old town got a visit off the authorities and fined him 600 euros just for going over a few decibals with his music. Quick on the vulnerable eh? The police want to get off their backsides out of their cars and parole these dodgey areas where the muggers and prostitutes and Pea men hang around
Quote
+1 #15 Les Harper 2018-10-15 09:09
The Spanish police can clean the area up within 24 hours
With a zero tolerance against pick pockets ladies of the night and the potato man
They know where these people hang out
If it where unruly English football fans they have the battens out
So start using it in those evil people
I love Benidorm but it’s going down hill fast
Quote
0 #14 Trev Vennard 2018-10-15 09:08
Spending more money and time in the old town rather than the strip now, it's a lot less hectic. Maybe that's just me getting old lol
Quote
0 #13 Francis Murray 2018-10-15 09:07
It’s slowly being taken over by the Magaluf type crowd. The sex shows, pole dancers on the street side of bars, the pub crawl tours with wristbands & games en route. That in-turn brings the demand for drugs so that encourages more and more dealers until it just becomes one big ruined cesspit
Quote
123
Refresh comments list