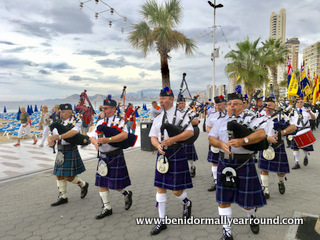 The 2018 Poppy Appeal was launched in Benidorm today and as in previous years, we had the privilege of the Torrevieja Pipes and Drums to lead the way, attracting the attention of all around. They make the journey down specially and totally make it the occasion it is. 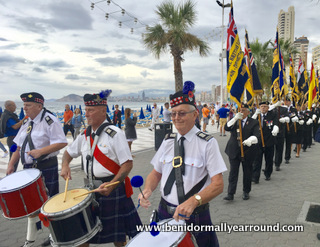 The parade headed down along the Levante promenade and followed by the immaculately turned out Standard Bearers after which was the Mayor Toni Perez, Vice British Consul Elizabeth Bell, Major Geary Allen – British Military Attaché in Madrid and Don Cubbon – Chairman RBL District North Spain. 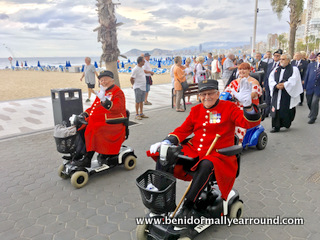 Behind them were the real stars of the event – Arthur ‘Skippy’ Teasdale and Wayne Campbell, the two Chelsea pensioners from the Royal Hospital, London in their distinctive scarlet coats who have been making the journey over for the launch of the poppy appeal for the last few years. 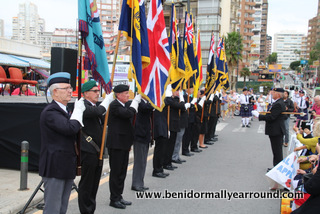 The entire procession attracted a huge round of applause as it passed from both the British and Spanish and fortunately, despite the looming grey clouds, the rain held off. After the short parade came the official part, with speeches and ending with both the national anthems. 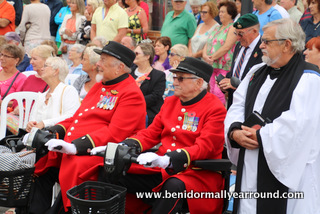 This year is particularly poignant as it marks 100 years since the end of World War I – what was supposed to be the war to end all wars… sadly we know this was not the case. The RBL is a charitable organisation, whose aim is to help and support serving and retired military personnel and their dependents. 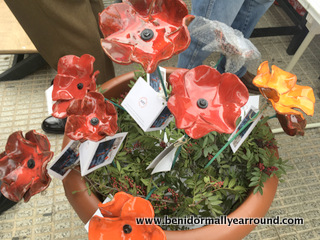 This has remained the primary purpose of the RBL throughout the last 100 years and will continue to be the same through the years ahead. The poppy that grew so profusely in the war torn fields of Flanders, where nothing else would, is their emblem and now worn with pride by many as a symbol of remembrance. 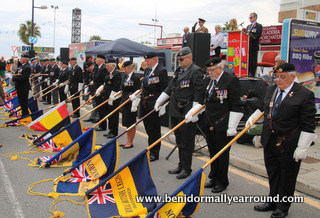 The poem that became the most famous of the war – In Flanders Fields, was not written by a Briton, but by a Canadian doctor, John McCrae, who worked long and terrible hours in a field hospital and was first published in December 1915 by Punch. Sadly McCrea did not live to see the lasting impact of his poem and died of pneumonia in Jan 1918 - he lies buried in Northern France.

The RBL gives us an opportunity to remember through a whole series of events in the UK and overseas, to say thank you to the men and women who helped shape the freedom we have today. Last year, in this part of Spain €169, 622.40 was raised from the poppy appeal – many places will now have them for sale.