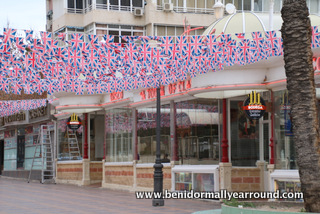 Union Jack bunting and flags are part of the furniture in Benidorm, in particular around bars in the Rincon area which is a favourite for visiting Brits. However, if you were to have read the newspaper headlines in The Sun and The Mirror at the beginning of the week you’d think that Bunting-Gate had broken out here.

But British bar owner Tracey Walker has stirred up a hornets nest by claiming that local police victimised her by ordering her to take down the union jack bunting she had outside her bar, Little Britannia on Carerr Bon Retiro, just off the walking street in the Old Town or face a €800 fine. 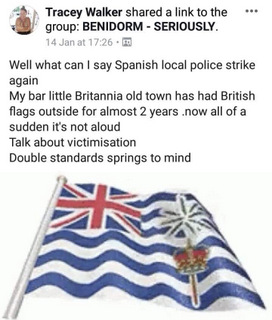 Her Facebook comment posted on Benidorm Seriously last week attracted over 200 comments and the red tops were quick to pick up on it – embellishing her statement with anything to fan the flames and spark anti-UK feelings here! They frequently tend to run stories about Benidorm, written by so-called reporters who have probably never even been here but instead trawl through social media for their 'facts' running the resort down. Apparently both papers contacted her but she was a little more coy when I messaged, stating that “It was all lies” in reference to the articles. 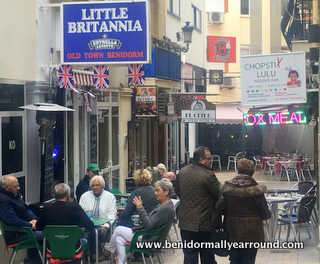 However, having spoken to a number of people all is not quite as it seems and the Spanish Police are not out victimising Brits here. A “very nice”police officer arrived one morning following a complaint that had been filed about flags in general and asked ALL the bars to remove ALL flags, including Spanish one, not just the Little Britannia. The previous week a Spanish bar was fined for refusing to remove theirs so they are certainly not targeting or discriminating against British businesses. On top of that, the flags at Little Britannia were also tied to electric cables, which the police officer pointed out so potentially a fire hazard. All the other bars along the street removed them with no issues. 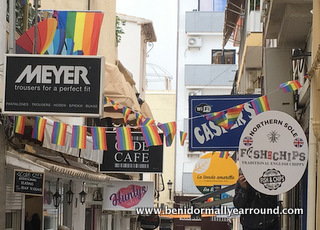 Walking past this afternoon, new union jacks had re-emerged on the front of the Little Britannia in obvious defiance but no other bars on any of the streets in the old town have flags outside – apart from a string of LGBT rainbow flags outside CODE Café on the next street. Many are angry as the story is implying that the Spanish Police are targeting the Brits, which couldn’t be further from the truth here. 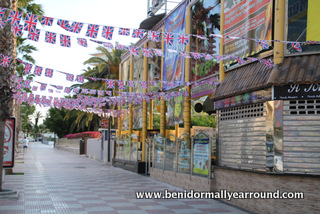 The Sun also states that “she – referring to Tracey, has hired a solicitor to fight the ban”. However, in contrast over on the Rincon de Loix side of Benidorm, almost every bar has union flags flying outside with no issue, even strung up over the pavements so not even on their own property with no problem. 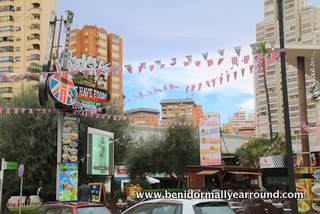 Walk past Jokers, Jumping Jacks and through The Square and its out in abundance - no pun intended! Obviously the police have not and cannot reveal who lodged the complaint and on what grounds, but rest assured, Spanish businesses are reliant on the Brits and wouldn’t do anything to jeopardise that – they know what side their bread is buttered!