Taxi for Jim – from Northern Ireland to Benidorm 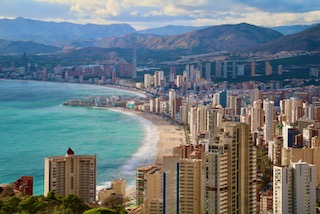 Jim Moore was reported missing in Benidorm last week whilst on a short 4 day break with a group of 14 friends – affectionately known as the ‘Punters Club’ from Co Antrim. They arrived last Thursday, staying in a number of apartments on the Acuarium II complex – just past the health centre on Avd Juan Fuster Zaragoza in the Rincon de Loix area.

Jim popped out to get some cigarettes on Friday evening and as it was not his first trip here was certainly familiar with his surroundings. As the gents were doing separate things, coming and going at different times, no-one was aware that Jim was missing until a pre-planned birthday party on Saturday at the Ibrox Bar for one of the group. Once they realised that Jim had not turned up they instantly knew something was wrong. They started a search – with numerous locals and holidaymakers joining in and spread the word on social media straight away, contacting as many people back home, including friend ‘taxi Phil’. 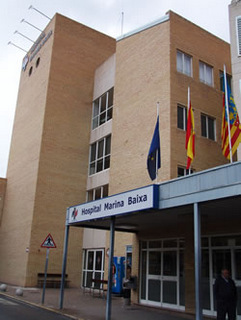 As word quickly spread across Facebook, a nurse working at Vila Joyosa hospital thought she recoginsed a patient fitting the description. Jim had made it back to the Acuarium complex and was found by two ladies staying there, on the floor of the entrance, who administered first aid and called an ambulance. On confirmation, family were contacted and 2 of the group stayed on until Jim’s son managed to get a flight over. Jim had suffered a fall resulting in a rather serious head injury and told by medics that he wouldn’t be able to fly back for some time due to cabin pressure. 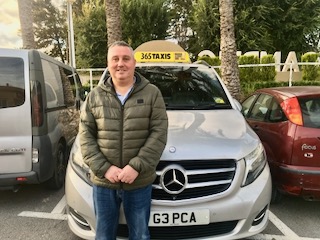 So to the rescue came 365 Taxis Newtownabbey and driver Phil Hamilton – aged a spritely 43 and NOT 68 as was reported in the press. Once everyone realised that the only way to get Jim back was by road, all heads turned to Phil who has much experience driving across Europe and so the ‘natural choice’. 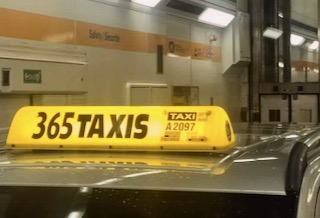 He set off on Thursday for the 1,700 mile journey, with wife Claire and daughter Abbie for company, catching a ferry to Scotland then down the length of the UK, to hop on the Channel tunnel and down through France and Spain. He refuelled 5 times, at a cost of €345 and passed through 9 tolls, totalling €274. 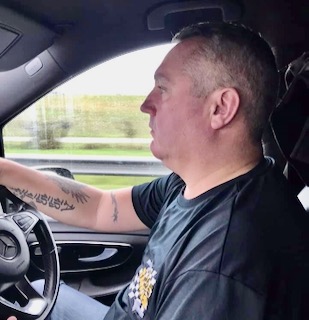 They stopped overnight in Bourges, some 250 km south of Paris to recharge their batteries and continued straight through to Benidorm, arriving around midnight on Saturday.
Media coverage has gone viral, with many praising Phil for his heroic and selfless efforts. But he is very quick to play down his part and said it has been a real team effort, with all the background staff at 365 Taxis needing a particular mention, keeping everyone updated on progress as well as all those here in Benidorm that went out searching immediately as news broke that Jim was missing – for this he, as a friend and all the family are truly and forever in debt. Phil admits that at times he did have fears that he may not see his friend again but had to push any negative thoughts out of his mind.

He was contacted by Lee Pearce, who’s father Phil Pearce went missing in Benidorm on September 9 and not been seen since, offering help, direction and advice, knowing the predicament and worry everyone was in, being in the same position. Thankfully for Jim’s family and friends he has been found but for Lee and Wayne Pearce, sadly the same cannot be said and at this point in time, there are no further clues to their father’s whereabouts.

Jim was discharged from hospital this afternoon and taking it easy, with his son staying close by before the long road journey back home.

The taxi will set off in the early hours of Thursdday morning, heading up to Santander where Brittany Ferries have offered 345 Taxi driver Phil and passengers a free overnight crossing to Cork – what a simply incredibly generous gesture.

They will then have around a further 6 hour drive up north before reaching home were there will undoubtedly be a few Guinness’s raised in celebration. An inspirational example of friendship and humanity #goingtheextramile.

+1 #1 Karen bell 2019-11-26 12:43
Just wanna say massive, massive respect to 365 and Phil Hamilton... I was personally in Benidorm when Jim went missing and the lengths that Phil and his family and 365 taxis have went up to ensure Jim gets home to his family safe Is astounding!!!!! 365 not just a taxi company but an asset to all their customers and friends in the NEWTOWNABBEY area. Your generosity and kindness really is out of this world. To not only go the extra mile but 3600 mile round trip is outstanding!!!!
Quote
Refresh comments list