How many would have guessed that when the very first episode of the ITV comedy series Benidorm hit our screens back in 2007, it would become the huge success that it is today. Series 8 is on our screens and with each year attracts more and more viewers – not to mention eager extras and famous faces actively vying for a cameo role. Filming has been going on at the poolside of the Sol Pelicanos hotel since the first series was filmed in 2006 - it’s just as well that the hotel hasn't had a major refurb in that time as it would ruin continuity of scenes! 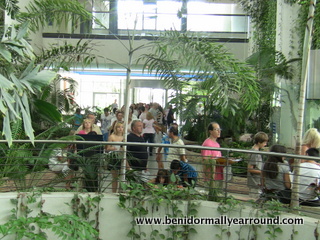 Back in 2006 little was known about what would turn out to be a major success story for Tiger Aspect. The callout for extras was very low key – I remember hearing an advert on a local radio station here telling people to go to “The Pink House” which then was used purely as an office for the production crew. In recent years it has been transformed into the “reception area” of the Solana Resort. I was one of those extras in the first series and admit I had never heard of any of the actors back then! When I asked what the series was about they replied it was about a typical family coming on an all-inclusive holiday to Benidorm…. didn´t sound too exciting, little was I to know. Anyone could apply to be an extra in the first couple of series – so long as you were here in Benidorm for the duration of filming. That has now changed and you need to have a social security number and be a resident. All the extras were Brits in the beginning – but now I think that it is about half British half Spanish. Those accepted were told to bring a selection of casual clothes, eveningwear and swimwear which were kept in the wardrobe department – which was and still is one of the hotel rooms on the first floor of the Sol Pelicanos hotel. When filming you will often see a clothes rail on the balcony at the front – that is the wardrobe department!

Sol Pelicanos - better known as Solana to many 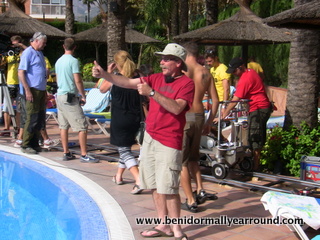 The pool and swim up bar of the Sol Pelicanos hotel has been used since the very first series, as has Morgans Tavern, which is transformed into “Neptunes” for the nightclub scenes. All the filming has to be done during the day when the club is shut to the public – the crew arrive around 6am to move furniture and lay cabling which has to be packed away each evening then bought back again the following day to continue filming. You can always tell when they are filming there as they have a line of Primoti vans parked up outside plus generators – as well as a green gazebo on the terrace for the cast. The extra's all sit together under the blue tent to the side of the shoot waiting to be called upon. The vast majority look thoroughly bored and are either reading a book or playing games on their mobiles - oh the excitement of being an extra! Most of the time is just spent waiting for Helena, the extra's co-ordinator to call them in. She gets the message via her walkie talkie that they require some extra's and she then calls out names from her clipboard and in they go making a note which ones are in a particular scene - incase they need to re-shoot.

Filming out on location 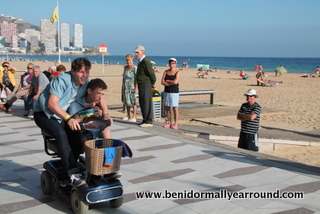 The pool scenes are more exciting as you can spend the day lounging around on a sunbed and reading whilst topping up your tan! However, I remember back to series 1 when I was an extra and had to keep getting in and out of the pool which by November was freezing - you had to pretend it was lovely and warm which was no mean feat considering that my teeth would be chattering and lips turning blue. Many popular tourist attractions have been used for filming – Levante beach, Benidorm Palace, Terra Mitica, Terra Natura, Aqualandia, Karting Finestrat, the Old Town, Fonts Algar in Callosa and even a “juicing trip”. The knock on effect for local businesses is fantastic and everyone wants to visit the various locations when here. 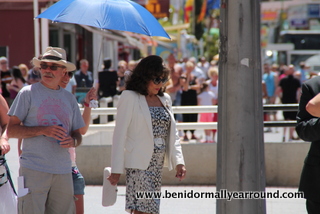 As for cameo appearances, the list of those having graced the Solana Resort is impressive. In series 1 there were only two – Ella Kenion and Niky Wardley who Derren worked with on The Catherine Tate show. Then for series 2 the first of a long line of popular actors started appearing, beginning with Wendy Richards and Margi Clarke. Since 2008 there has been Sheridan Smith, Keith Barron, Una Stubbs, Louie Spence, Sue Pollard and pop group Wizzard in the 2010 Christmas Special, Cilla Black, Denise Welch, Matthew Kelly, Siobhan Redmond, Kate O´Mara, ken Morley, The Krankies, Janet Street Porter to name some….. BUT the one name everyone is still in disbelief at is Hollywood screen legend and now Dame, Joan Collins! She made her debut in the last episode of series 6 and is back again for the new series 7 & 8, playing Crystal Hennesey-Vaas, the CEO of the Solana Hotel Group. The entire Rincon area came to a standstill when she arrived to film her scenes, with shocked holidaymakers unable to quiet believe their eyes. What a coup for Derren. 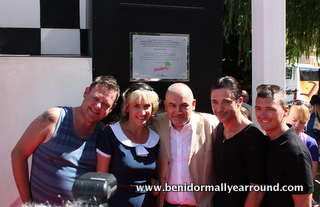 It is all thanks to the creator and writer of the show, Derren Litten, that he chose our resort to base the series in. Although a popular destination even prior to the program, it catapulted bookings and continues to do so every time the series is screened. In May 2012 I approached the Town Hall with a proposal to place a plaque of some sort in acknowledgement to Derren for his contribution to increased British tourism to the town of Benidorm. The Mayor and tourism office were very keen and enthusiastic with the idea right from the beginning. Once I had their confirmation and approval I liaised with the production company, Tiger Aspect in London and the British Consulate in Alicante to fix a date in the diary for the event. This was actually far harder than it sounds, trying to find a mutually suitable date for the Mayor, Consul and Derren - at least I made Telefonica happy with all the calls I made! Next was finding a location, which I thought obviously had to have some relevance to the series. 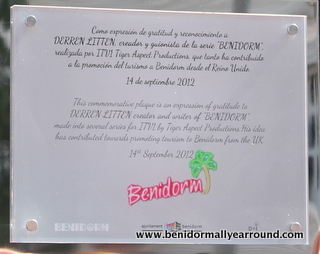 What better site than the area between Morgan´s Tavern and the Sol Pelicanos hotel - where the majority of the filming took place.... next to the Tourist Information Office which has a heavy footfall of visitors. Finally the wording for the plaque itself.... which obviously had to be in both English and Spanish. I sent my proposal to Tiger Aspect for their contribution, which they were happy with and then finally to Yolanda Pickett, Director of Tourism for final approval. The Mayor Agustin Navarro and British Consul Paul Rodwell unveiled the plaque on Friday 14th September 2012 to Derren in the presence of Tiger Aspect representatives as well as a number of cast members. 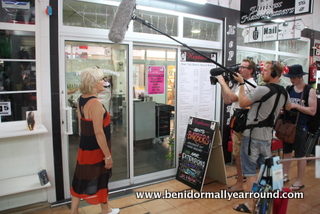 Over the years I have been fortunate enough to meet and interview many of the cast, directors, producers and crew thanks to Tiger Aspect. You can read them by clicking on the photos of the person. Sherrie Hewson, who plays Solana Manageress Joyce Temple-Savage was back in Benidorm this Summer filming for the Good Morning Britain Lorraine breakfast show, interviewing ex-pats who have made the move to the sun.

Benidorm series 9 will soon be in the filming progress, keep an eye out and see who you spot around Benidorm when filming. 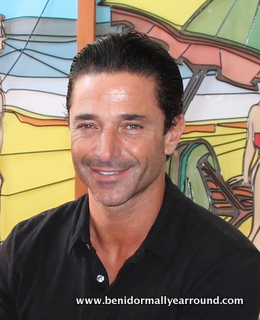 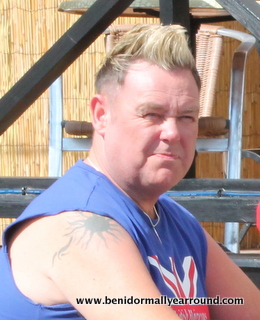 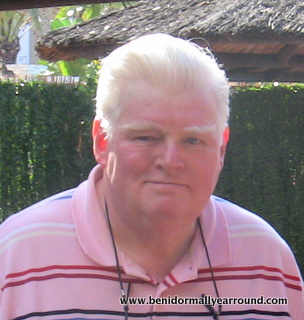 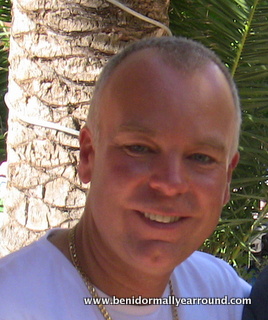 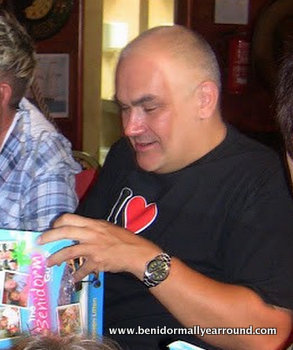 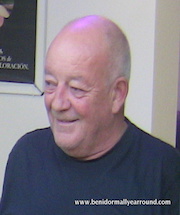 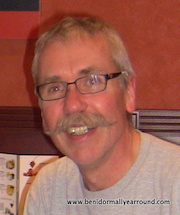 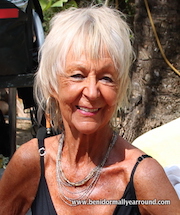 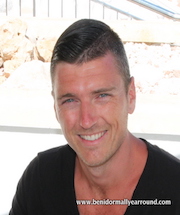 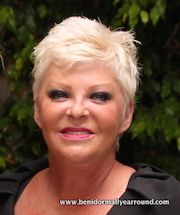 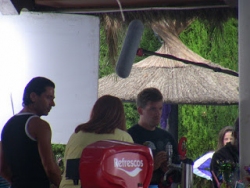 According to Matthew Kelly who was on ITV's lunch time show "Loose Women" yesterday, the new series is starting on FRiday 24th Febuary. Matthew had a cameo role and his episode will be on air the following week - 2nd March.Over the past 4 series, many celebs and stars have had cameo appearances such as Cilla Black, Sue Pollard, Wendy Richards and Denise Welch - who's husband Tim Healy is a regular cast member. 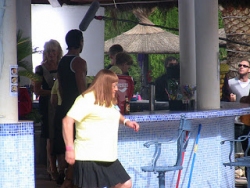 If you want to ever know where the filming is taking place you just need to walk around town to see where the Primoti vans and generator are parked up. Yesterday they took advantage of the break in weather .... whoever said it doesn't rain here in Spain obviously only ever comes here in the Summer. Its been raining cats and dogs over the last few days 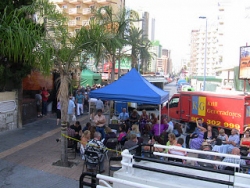