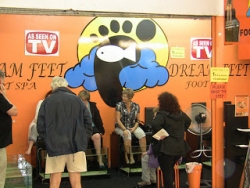 As most of you are aware there is a growing trend for people to stick their feet in a tank full of fish ... known as the "Garra Rufa Fish pedicure".... where flesh eating fish nibble the dead skin off your feet. The trend spread like wildfire throughout the UK last year - it originated in Asia and Benidorm was no exception to this beauty craze.
The first shop was opened by an English gent called Colin - whose premises are called "Dream Feet" and he was  featured when ITV Daybreak came to Benidorm in the Summer. Steve Hargrave the presenter even indulged in a quick session.
In the UK the treatments can cost between £10 and £50 but here at the Benidorm Indoor Market a fish war has broken out between owners! Initially Dream Feet was the only foot spa and offered a 15 minute treatment for 10€. Then a Spanish competitor opened up 2 doors away and charged 5€ ... so the price war continued until the beginning of this week when the Spanish owner dropped his price to 1€. Initially Dream Feet resisted - but not having a single customer that first day made them reluctantly change their price to 1€ too. But this can't go on indefinately and either one or both will end up going under..... what a sad situation.Neither shop was full but there were customers around.  However, on the main Avd. Mediterraneo 2 foot spas are still charging "normal" prices: "Angel Feet" located near to the Avd. Europa charge 10€ for 20 minutes and "Happy Feet" nearer to the Rincon end charge 5€ for 15 minutes. 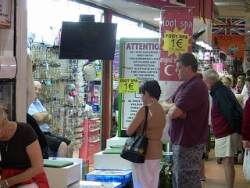 But in the UK questions have been raised recently about the possible health risks associated with this fad. In some US States it has been banned amid fears that infection could spread through open wounds. A report by the UK Health Protection Agency has said that the risk is "extremely low but cannot be completely excluded".
There is a huge investment in opening up one of these foot spa's .... the cost of the fish alone runs into hundreds of euro's per tank. Multiply that by 6-8 tanks per shop unit and it can be a very costly start up - lets hope that it soon gets resolved !