The Benidorm Elvis Fiesta has kicked off - the 4th such event to take place in the resort. The 3 day event sees Elvis fans flock not only from the UK but also from across Europe. The Melia Hotel is the base for the event - and where yesterday I got to meet the participating ETA´s ... Elvis Tribute Artistes, all in character and at various stages of his life. But one thing which they all had in common was passion and sideburns!

Lined up in the picture, starting from the left with the blue jacket is Paul Molloy, Ciaran Houlihan - Irelands No 1 ETA, Benidorms very own Simon Patrick, Mike Nova, Dean Mack, Darren ´Graceland´ Jones - with a name like that obviously from Wales, Juan Lozano and Tom Gilson. There were also others who couldn´t make the photo...

I spoke with Veronica, the marketing manager at the hotel who is delighted to welcome back the fans and to be hosting the event for the fourth year running. She told me it creates a fantastic atmosphere and even the hotel guests are enjoying the music, especially those sat around the pool - an unexpected bonus for them.

There is an incredible weekend of entertainment lined up for the Elvis fans - fun filled poolside shows at the Melia, Elvis themed games, a world class ETA line up with shows going on in 3 separate venues and of course the legendary after show parties - which go on well into the early hours!

As in previous years, Peter Phillips, the organiser of this and the legendary Porthcawl Elvis festival, which attracts over 30,000 fans every September to the sleepy seaside town in South Wales was on hand to oversee the event - together with his assistant Harriet.

It certainly takes a lot of energy to put together the smooth running of this weekend extravaganza and to ensure that all the fans go away buzzing and enthused. Next year Peter told me will be the 5th anniversary here in Benidorm and they are planning a show stopper! The date has already been booked - 17th - 19th April 2015, which is after Easter as it falls on April 5th next year.

The admittance to all the events and venues is strictly restricted to ticket holders - you actually get a wristband much like the all inclusive ones. Places had actually sold out months ago for this 3 day event - this is to ensure that there is enough room for paying fans to get in. As last year the "Rock & Roll House" and "Levi´s Showboat" are also used in addition to the Melia hotel.

However, as it is the 5th anniversary next year, a spectacular closing show on Sunday 19th April will be held at Benidorm Palace - and tickets will be on sale for those wishing to attend this one special show, which will feature 12 World Class Elvis´s all on one stage! That should certainly be an event not to be missed. 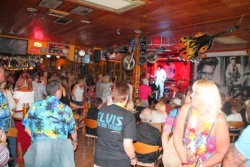 Well the sun is shining and if you are out and about in the Rincon area you may think you had overdone last nights partying if you see a line of Elvis´s walking down the street - there are plenty around this weekend.