Well another year means another new show at Benidorm Palace, and this year it is called "Nostalgia" - they change the show every May, just prior to the busy summer season. It really should be on your to do list - it is an absolutely spectacular evening, whether your chose to make it a full night out with dinner or just come for the show you will most definitely not be disappointed.

I met up with David Moore, the artistic and creative director, whose production company tailor makes the shows for the Palace. He has a wealth of experience in staging massive productions like this having worked in many of Europe´s prestigious entertainment venues. The key is planning he told me - and to highlight the fact he already has a preliminary framework for next years production! Many of the fabrics for the costumes have to be sourced from around the world and therefore you have to plan in advance.

The key to a successful show is to have something for everyone and to come up with new and original ideas and not just re-hash old routines. You have to stir the imagination and arouse the curiosity to create a new audience. This was particularly evident to me in this new production with the Michael Jackson performance - it was something completely different which I have never seen before. To be perfectly honest, when they first came out I though "Oh no, this is a mistake" but I very quickly changed my mind as the troupe danced to all the classic Jackson hits - even getting everyone in the audience clapping and tapping to the rhythms, particularly the younger ones.... it truly was fantastic - am Im not a particularly huge Michael Jackson fan.

I asked David where his inspiration for this number came from and he told me that he knew that "Cirque de Soleil" were touring with "The Immortal World Tour" this year in tribute to the pop icon so basically it is a wink to something current and innovative.

In total there are 28 dancers - a mix of Spanish, Russian, British and Belgian, all of which have been trained differently with their own techniques. It is up to the 4 choreographers - 2 Spanish, 1 Irish and 1 International to bring them all together in a coherent and organised fashion, which can be a real challenge for them as well as for the dancers, as they are very diverse! Many of the dancers come from the Northern Ballet School, an international centre of excellence in training for classical ballet and musical theatre and although they are taught different styles the Spanish flamenco is minimal. These dance routines are led by the Spanish trained dancers who are at the front of the line up - an interesting fact is that non of the Spanish girls will do any of the topless routines.

I was delighted that the Irish routine is back this year - which is always a hit with the Brits. However, this is one of the hardest techniques for the dancers to learn but they do brilliantly and I am sure that Michael Flatley would be suitably impressed. Once again they are beautifully turned out in green velvet and the girls all don typical Irish redhead wigs - no attention to detail is spared for this high energy number.

The dancers all arrive at the palace on show nights between 6 and 6.30pm for rehearsals. They have to pre-set their own costumes -  each has a square of plastic on which they set the things they will need for all their routines in the first half of the show. The dresses are all on rails and numbered and the larger ones are suspended on overhead rails. They position their squares on either side of the stage at 9.30pm - exactly half an hour before the start of the show. The girls all do their own hair and make up but when they start they are given lessons by a professional in applying theatrical make up. 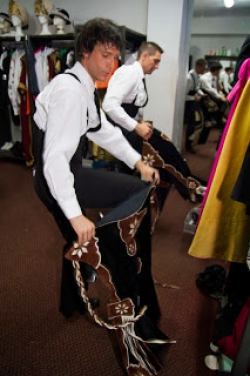 There are always two staff that help the girls in particular with the changes and attend to any accidents, such as rips and jammed zippers. Items that touch the skin are washed after every single performance - I bet they have a laundrette in the basement... can you imagine the number of items which have to be laundered! Many of the elaborate costumes have detachable linings which can be easily removed for washing.

This year there are 6 attractions interspersed between the dance routines. There is even an audience participation act where 4 members of the audience are plucked onto the stage but one of the most popular has to be "Golden Design" - the three strong men. This year they have been cleverly incorporated into one of the dance routines and they arrive on stage during a performance - most ingenious!

For some reason I had the idea that they were East European, with my guess being Bulgarian, but was somewhat surprised to learn that they are in fact Moroccan.

The leader is Sayid, who is the "big one" with the bulging muscles and does the majority of the lifting.... not sure how else to describe him - my guess is that he is not a vegetarian! Sayid has an incredible amount of showbiz experience having worked extensively in the United States prior to arriving in Spain. He has a family and is currently training his son, who was born in the USA and in his 20´s to take part in the act - and potentially take over when he retires I guess. The middle one is Rashid who as well as performing at the palace in the evenings also works at Terra Mitica during the day - wowing the crowds with his stunts and acrobatics during the shows. The "little one" - but an integral part of the act is Abdul and I was delighted to hear that he has just got married.... maybe some little strong boys will be on the way soon!

Just like theatres have understudies, Benidorm Palace like any dance productions have "swings" - the equivalent. These are necessary replacements which are on hand for sickness, injury and holidays. If a member of the troupe is not there then the entire routine has to be re-staged, or the correct term is re-blocked - and this is usually done at very short notice. Suddenly one girl that normally works on the left of the stage has to work from the opposite side and mirror her normal movements - which I can imagine is terribly difficult... she also has to remember to pre-set her costumes at the opposite side to where she normally comes on!

This year they have a compare by way of David Climent, son of the owners Christine and Vicente - also ring master at the Circus and looking very dapper. He introduces the show and even appears throughout the evening in not one but two of the 6 attractions - one which is the mesmerising laser show which took many hours of training and rehearsals.

You will not be disappointed I guarantee - it is 3 hours of sheer creative brilliance and the artistic genius of David Moore, although not one to court the limelight but always in the background is quite rightly mentioned at the end of the production by the compare. Well done once again - I can hardly wait until next years show as I have already had a sneak preview of some of the ideas!

0 #1 Chanel johnson 2016-08-04 21:42
I just seen the show I see it every year was fabulous as ever the lovely David Moore took me back stage and I had my photo taken with the dancers I'm 13 years old and it's my ambition to dance with this amazing team one day a big thank you to every one especially David x
Quote
Refresh comments list