Fallas go up in smoke

Last night the Valencian region went up in smoke ... literally, as the Fallas were lit!
It was the grand finale and climax which marked the end of the 5 day fiesta. A years worth of hard work was reduced to a pile of ash in minutes - its amazing how quickly they burn.

I travelled up to Valencia - the home of the Fallas. If you every get the opportunity I would certainly recommend that you go to watch this absolutely amazing spectacle at least once - its my third time of going, but as I didn´t get back till 3.30am think it may be my last... my body can´t cope with late nights and early morning school runs anymore! 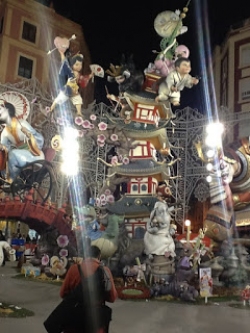 Many of the streets had the most stunning light displays - I can´t imagine how much the electricity costs  to keep them going or how many million bulbs were used to create them. Literally hundreds of thousands of people walked the streets to admire both the light displays and Fallas - it was certainly pickpocket paradise as people were wedged together and moved along en mass at some points.

The size of the various fallas is hard to comprehend unless you are actually there to witness it yourself. Some of the constructions rose to the same level as the very nearby five storey buildings. But the detail that has gone into making these models is stunning and must have been heartbreaking to watch go up in smoke by those who made them. 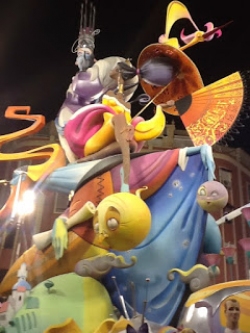 If you are not a lover of loud noises then it is probably not a good idea to go.
Mascletas, similar to bangers, were going off throughout the night in very close proximity and even seemingly young children were throwing them. I know it´s a cultural thing, but I still find it hard to understand when I watch parents helping 5 year year olds to light and throw them that they can´t see the potential dangers!
The children here in Spain grow up with the noise and there were countless babies in prams being pushed through the crowds and part of the penya´s ... they obviously become immune over the years! 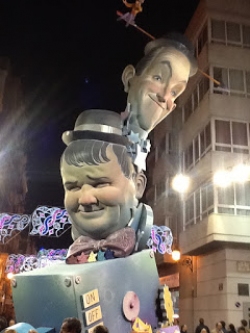 I am not too sure how many fallas there were in Valencia, at the turn of every street corner there was yet another one. Some were themed with a political slant and they even had a Laurel & Hardy one, whilst others were just beautiful to look at and admire. I wonder how and who picks the theme of each one.

One thing is for sure, all the bars and restaurants definitely benefited as they were jam packed - even the queues at Burger King were coming out of the doors... I hope that the staff were getting paid at least double, they certainly deserved it! 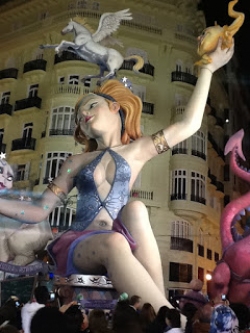 The burnings started at 11pm - with the smaller children´s one being lit first. Crowds assembled around their favourite ones and it was scary quite how close they were allowed to get. But those at the front didn´t stay there for long once they were lit as the heat coming off them was really intense.

A fire truck and crew of about six firemen were present at every single one - they must have called in fire crews from across half of Spain I should think.

One of the fallas was so close to a building that a fire resistant blanket was draped across the front of it! You could watch the fireman suspended like a mountaineer from the top of the five storey building unrolling the fabric - you would logically think not to have such a large one at that location but that is naturally too obvious! 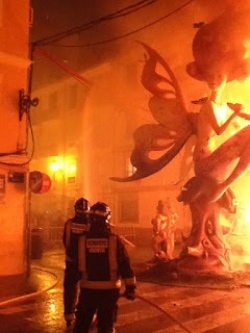 Telephone and electric cables were literally a few metres from some of these effigies and the firemen spent most of the time hosing them down so that they didn´t melt or catch fire! The facades of the building were also constantly hosed down... I wouldn´t like to have to clean the soot off the windows today!

The amount of water wasted to keep the nearby buildings safe is close to sacrilege in my opinion... I wonder if its the tax payers of Valencia that have to pay for it! I appreciate that the fallas bring a lot of money and tourism to the City but surely there must be other options. 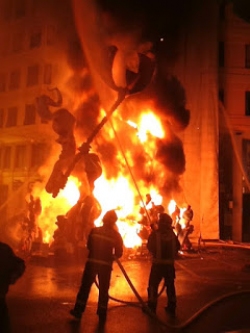 An event like this wouldn´t even get off the drawing board in the UK .... Health & Safety officials would be hyper-ventilating at all the breeches of regulations! For one how would an emergency vehicle get through the thousands of people... it was a slight concern actually, but this has been going on for decades here.

They are certainly well prepared and there were no incidents as far as I am aware. Massive container lorries were parked up nearby each falla to sweep up the remnants and ash of each one after they had finished burning - the streets had to be ready for traffic this morning as it is a normal working day. The Spanish are so efficient at some things - in particular anything related to fiestas and fun! 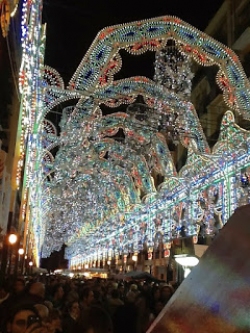