One of the most breath taking views to be had of Benidorm has to be from the top of the Sierra Helada (meaning Ice Mountain) - often referred to as "The Hill" at the Rincon de Loix.  Many holiday makers trek up to the top, but be aware that its probably a good 45 minute walk each way (obviously depending on how fit you are)... and there´s no coffee shop at the top, so take a bottle of water with you.
At the very top is a Benidorm landmark - The Cross, which can be seen for miles around. The cross was erected during the 1950´s by the local residents to bring luck and protection to the town. I drove most of the way up the hill, but the last 100 metres has to be done on foot, up make shift steps and over uneven rocky terrain.... wasn´t such a good idea in my 6 inch heels!
The cross itself is huge, possibly about 8-9 metres high and made of metal. Over the last few years it has become the focal point as a shrine for lost loved ones, with plaques and mementos covering the lower portion of the structure. Many people even take ashes of loved ones to be scattered but doing so in a public place without permission is actually illegal in Spain.
However, trouble is brewing at the Town Hall, as the opposition PP party have asked that the Mayor, Agustin Navarro take action and cleans the area up. They argue that as part of an area of outstanding beauty, the Natural Sierra Helada Park is a protected area, which is currently being "defaced". They have requested in writing that all memorabilia is removed and that signs are placed to indicate that it is prohibited to erect anything in the area. 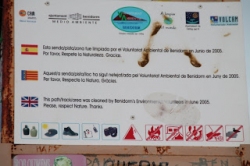 There are signs around the vicinity asking visitors to respect the area, but non actually mention that it is illegal to place plaques up. However, the graffiti defacing the bottom of the cross is shocking, and most probably done by youngsters rather than those visiting in memory of a loved one. Such a shame that the actions of the irresponsible will probably ruin it for everyone... 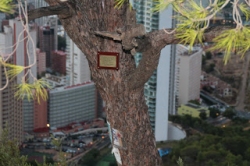 But rather sadly, not content with placing something on the base of the cross itself, some people are now digging into the trunks of trees to nail plaques up - and climbing quite high up to do so too, risking injury to themselves in the process. Urns with ashes have also been left wedged in between branches...
Last month the council removed the love padlocks  from the stairs leading up to the Mirador in the Old Town, following complaints from local residents. It was revealed that they were sold for scrap, raising only 266 euros, which was then donated to "Caritas" - a charity run by the Catholic church, helping the poor of the town. To date a replacement handrail has still not been installed. 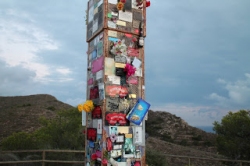 So will the mementos around the Cross follow the same fate... only time will tell - the opposition will certainly keep the pressure on for a result. But I must say that I do agree up to a point - the area has been somewhat ruined by the small minority with the graffiti. It reminds me of a roadside where there has been a fatality and flowers, teddybears and shrines are left - but these are only temporary as they are removed by the police for being deemed a distraction to drivers.

+4 #1 Andrew Smith 2015-09-22 23:00
Me a some family and friends climbed up there to place a pic of my grandad that should of gone on his 1st holiday abroad but passed away just a few weeks earlier so i took his place so when i saw this from our hotel i had to do it for him,we placed a pic a postcard there with a message and he's looking down over benidorm town now over that amazing view,but i wasnt stopping there so carried on climbing up to the top of mountain behind the cross and it was breathtaking in more ways than 1 but was well worth it R.I.P Grandad xx
Quote | Report to administrator
Refresh comments list