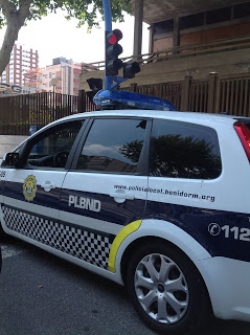 Benidorm Mayor Agustin Navarro chaired a meeting at the Town Hall yesterday with the Head of Security, Police officials and local business leaders to discuss the issues raised following much controversial press coverage in the UK national papers - most notably The Sun.

The City Council have requested that Central Government restore National Police reinforcements during the busy Summer period having noticed a reduction from previous years. The Mayor was satisfied that Alberto Martinez, representative from the regional government was willing to address the situation, especially as Benidorm relies so heavily on its image. Municipal sources admitted that additional funding this year had been "slightly lower than in other years" but all coastal resorts had suffered equally.

Navarro was forthright that the image of the town needs to be addressed and better co-ordination between the Local Police and National Police especially in the "busiest areas" referring to the English Square. At a previous meeting it was proposed that a "sub police station" should be installed in the area with English speaking police staff to better assist the holiday makers and make the process of reporting crime easier.

At the moment when a "petty" crime is committed, such as wallet pinched, most tourists do not report it as they know there is little chance of recovering it. In addition there is the aggravation of having to spend time at the Police station, often with a translator. However, if these crimes are not reported then "officially" they do not exist therefore police numbers are not increased accordingly - its a catch 22 situation.

One thing you will never see in Benidorm is a policeman/woman walking or heaven forbid, running after anyone. They are either sitting in their cars or on a motorbike - there is no such thing as "walking the beat" here. Last week I saw a police car do a U Turn on the Avd Mediterraneo and apprehend a "look out". Look outs are there to give warning to the peamen that the police are about - they whistle and the conmen quickly disperse.  The two lady officers didn´t even get out of the car - they just lowered their window, leaned out and 10 seconds later were gone.

The pea men are an organised criminal group that will try and entice you to place bets on where the pea is hidden. The crowd watching are made up of gang members supposedly placing bets and winning and telling you how easy it is.... STAY AWAY!!!!! They set up on busy pavements - a popular spot is on the Avd Mediterraneo at the corner where the Wine Barril money exchange is and also outside the entrance to the Indoor Market. They make up a "table" out of a cardboard box, bring out the 3 potato halves and off they go.

However, the pickpockets and con merchants know there is little that can be done if they are caught with less than 400 euros.... and so until this law is changed I believe that little will change. Perhaps they should approach the issue of theft the same way that Saudi Arabia does!