Mayhem & Madness: the tales of an airport transfer company

Have you every wondered what goes on behind the scenes at a shuttle transfer call centre? I asked one of the young ladies to recall a typical working day and here is her account....

Oscar Wilde once said "there is more stupidity than hydrogen in the universe, and it has a longer shelf life"- this had never become more apparent than when I started work for an airport transfer company. The instructions given to predominantly British tourists was to call a number the day before their flight in order to confirm what time the shuttle bus would come to pick them up for their return journey to the airport. Now compared to IKEA flatpack furniture - and correct me if Im wrong, these seem to be totally foolproof instructions! However, I was quickly mistaken at just how much common sense one can lack.

The first problem I came across was the strong accents customers seem to have, classing strong as anything outside the radius of the M25. After adjusting myself to to deal with this I was asked the most peculiar question: for a flight that was to take off at 8 o´clock in the evening, would the 5 o´clock pick-up be in the morning or evening? Having been bought up around people blessed with common sense, I sarcastically replied that the pick up would indeed be in the morning to allow for any traffic (the airport is half an hour away) and problems at check in. However this soon backfired as I could hear on the other end of the phone the customer relaying this newly-found information to their other half. Thinking quick on my feet, and taking advantage of the fact that they were hard of hearing, I shouted down the phone that it was indeed a "tea time" pick-up - to which they confirmed the time and I re-confirmed. This occurred back and forth for about 30 seconds.

Thinking that such questions were more the rarity than the common, I carried on answering the phone forgetting about the first incident. It is common knowledge that us Londoners like to keep ourselves to ourselves, and that divulging more information than necessary is certainly frowned upon. This is clearly not the case for most people. For a select group of people, it is totally the norm to tell me all about their two week stay in Benidorm. I now consider myself somewhat of an expert on what and what not to get on the buffet cart at dinner, why the hotel certainly didn´t deserve its 3rd star rating and most importantly, all about Juan on reception´s nieces christening last Saturday.

While conversations like these I don´t mind too much, others shoot to the top of the list of people testing my patience. A top example of this is when I was asked by a customer why the pool wasn´t warm enough for their liking. Being no expert on the physics of water heating up and certainly not being prepared for these sorts of ridiculous questions I searched my common sense for a) a way to laugh more subtly and b) how on earth I came to find myself sitting in an office being asked about pool temperatures. The answer lay in the fact that the pool lay in the shade all day. The response I got to this was "why can´t the pool just be moved". Yes.... why indeed.
When a customer calls up they fall into one of three categories, all of which lead me to the same conclusion  of rendering me speechless - but let us remember that its the journey and not the destination that makes for a good story. After picking up the phone the first set of people rather stereotypically come out with "do you speak English" and I hear a huge sigh of relief on answering that "of course I speak English". The second group of people, upon picking up, bombard me with irrelevant information such as their date of arrival and room number. The third, and the group I dread simply state the name of their hotel before promptly asking "what time". Yes... because Iam psychic and know everything about you including your name and therefore require no more information other than the sound of your voice and hotel name! 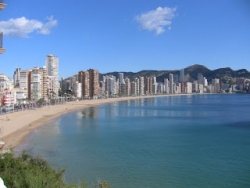 Some people call up for various reasons of why they have not made it onto the bus - not being in the right place probably has something to do with it. One group of passengers who found themselves in this predicament called me in a panic regarding the whereabouts of their bus. Upon learning this I asked them the mandatory questions such as their name, hotel and where they were currently waiting. Usually the answer to this last question, coming from someone who has not made it onto the bus is along the lines of being outside another similarly named hotel or on the wrong side of the road. However, the passengers in question took me by surprise. Their response was that they were waiting in their hotel room and had been all morning. How they ever intended or expected to get on the bus I will never know.
As a shuttle transfer company, some of the questions I find myself faced with baffle me. A very common occurrence is being mistaken for individual airlines and subsequently being asked to change flights. On another occasion I answered the phone to someone who unfortunately had had their phone stolen and asked me if I could issue a police report. Sadly, as in an busy resort things go missing or are stolen - with sentimental value often costing more than the monetary value of the item. One lady in particular had her case mistaken taken by another passenger at an earlier stop - at absolutely no fault of the driver. Upon retrieving her missing case she called to tell us that totally irreplaceable items were missing and this had now ruined her holiday. I suggested that she files a police report to learn that the objects in question were a bag of make up and a bikini!

On the flip side we also get calls and letters thanking us for the wonderful service received and that they are already booking their holiday for the following year - and asking the opinion of a certain hotel.  Working with people, some of which seem to have left their common sense on the runway in the UK can be a challenging or rewarding experience - depending on the day of the week and who is on the other end of the line.

The one thing that has become clear to me is the fact that a simple please or thank you can make my day, and no matter what your query I will be happy to help as best as I can.