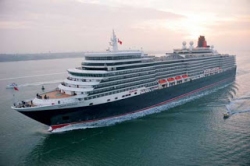 The Queen Elizabeth cruise ship, operated by Cunard arrives in the port of Alicante today this morning, sailing in from Rome then setting sail again at 17.00 this afternoon for Gibraltar.
The 2100 passengers, (and 900 staff) will have the opportunity to disembark and spend the day on shore - I remember earlier this year there was talk of offering an excursion service to coach them over to Benidorm but not sure whether this materialised or not. It would certainly be good for the resort!

The Queen Elizabeth was built in 2010 and is 294 metres long (963 ft in old money). Her maiden voyyage set sail on 12th October 2010 from Southampton heading to the Spanish port of Vigo in Northern Spain before heading to Lisbon, Cadiz and the Canaries.

You can catch the tram to Alicante from Benidorm - it literally terminates at the port and you can spend an enjoyable day out in the city. You can walk around the port and marina admiring the boats bobbing up and down and enjoy a drink along the harbour. For those that like a flutter, there is a casino located there - The Casino Mediterraneo. Remember to take you passport of ID if you plan to go in though. There use to also be one in Villa Joyosa but that closed down some years ago.

From the port area you can´t fail to see the Santa Barbara Castle, perched up high overlooking Alicante. It is one of the largest medieval fortresses in Europe built by the Moors in the 10th Century. The castle is free to visit and you will see everything a castle should have: cannons, dungeons, lookout tower  but most of all a spectacular view of the city. Its a bit of a walk to get there, alternatively you can take the elevator - for which there is a charge.

The marbled promenade running parallel to the seafront is overflowing in the evening with people taking an evening stroll. They have stalls that are open into the early hours of the morning selling a multitude of things and an open air music pavilion where you can often catch a free concert.

In the centre are lots of shops, including the department store El Corte Ingles - similar to John Lewis and you will aslo find the British Consulate here.