The charity golf day held on Sunday was a great success and very well attended. The venue was the beauitiful Villaitana golf resort in Benidorm - located up towards Terra Mitica.
I popped by on Saturday to find Dave, Ted and Aldo busy setting everything up - you don´t realise how much preparation goes on behind the scenes to make events such as this possible.

The boys had been there for most of the day and they took me for a spin on a golf buggy around the 18 hole course, a first for me! Each hole had been kindly sponsored by a local business and had advertising boards, so we were checking that they were all secure as a slight wind was whipping up. 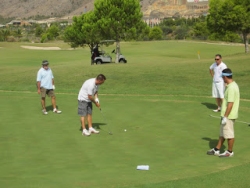 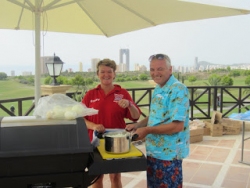 The actual day of the tournament was an early start, 8am - which more or less happened. An incredible 80 players took part, playing for 4 teams. Unfortunately my bed was far too comfortable so I arrived mid morning to find Dave and Co busy at work - poor Martin had the "enviable job" of chopping enough onions to accompany 100 odd burgers! 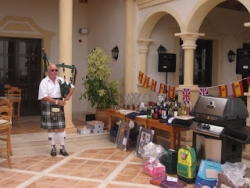 The incredible array of raffle and auction prizes were being put out and the generosity of businesses is heartwarming, especially in the current economic climate. The top prize was a shiny monster bbq worth 700 euros, donated by The BBQ shop in Calpe and The Bed Centre in Calpe, which was won by a Eduardo, a Spanish golfer. Thanks also to Benidorm Palace who donated tickets to the show and Circus, Wayne at Showboat for a meal for 2, lots of drinks courtesy of The Buying Group, who also sponsored 2 holes on the course - the list is endless!

I drove around the course with Ted and we stopped at each hole to take pictures and offer water, sandwiches and cakes to the players - its hungry work tapping that ball around... can you tell Im not a player. I must say that I am almost tempted to take up golfing but one thing stands in the way.... the golf shoes Id have to wear. If I could wear a 6 inch diamante version I may be tempted, but somehow.... 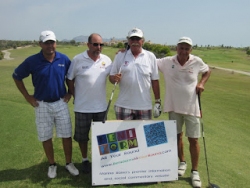 The players started arriving back at the 19th hole, Club house shortly before noon - you see I have already picked up golfing terminology! Score cards were handed in to Dave and his assistants who spent the next hour or so adding figures up to work out who the winners were. The players all enjoyed some refreshments and cooled off in the shade. The staff at the Golf resort were great, busily rushing around and serving some very thirsty chaps - and there was also a good show of lady golfers too.

Dave took to the mic to give a thank you speech, which included the golfers for participating in the day, all the sponsors and generous prize donors and everyone that came to support the event. He then invited all the hungry players to enjoy the bbq, which smelt delicious. All the food for the bbq had been provided by Ted of the Union Jack Bar in Benidorm free of charge - what a star.

Once the golfers were fed Dave then announced all the winners..... each of the four participating teams had individual winners but what everyone was waiting to hear was the overal team which would win the Emaus Cup.... and that honor went to "The Union Jack Golf Society" with a score of 596 points. 2nd place went to Villaitana with 584 points, 3rd place Alfaz/Albir and 4th Team Europe.

The president of the Emaus charity, Monserrat came along to thank everyone for their gallant efforts to raise money for the children´s charity. They are at present concentrating their fundraising to buy school books for the 200 children, and I certainly know how expensive that is here! In Spain the schools do not provide the text books and it is the parents responsibility to buy them, as well as exercise books and stationary. Last years text books for my son came to over 400 euros so you can only imagine how much it costs to equip all the children with books!

Another very important lady that was present was Deborah Alvarez Turner, mother of a very special little girl called Keira. The Emaus charity are also helping fundraise in order to send Keira to Florida for some intensive therapy that she requires, having been born with cerebral palsy, brain damage and epilepsy. Virgin Airlines are providing the flights to Florida Kiera and her mum which is amazing and the charity arm of McDonalds are helping with the accommodation. Another huge helping hand comes from the "Tartan Army" who have added 1100 GBP to the Keira fund - Deborah is Scottish herself.  They are a group of supporters of the Scottish National football team and follow the team around when abroad. They do an awful lot of fundraising and find local charities where ever the team are playing - they helped to build a football pitch at one of the Emaus homes last year. For the golf tournament Deborah organised a secret auction with a prize of 3 night break in the north of Spain in Asturias!

The tournament raised 3200 euros and an additional 1000 euros was raised from two other fundraising events over the weekend, so a total of 4200 euros was  handed over to a delighted Monserrat. She was touched and very appreciative of the generosity that everyone showed towards the charity.

Well done to everyone who helped to make this day a success, especially Dave Morris of the Union Jack Golf Society and Tony at The Bed Centre in Calpe for organising the event.