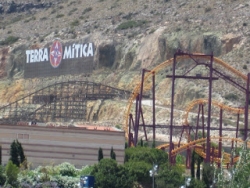 As  of today, Terra Mitica Theme Park in Benidorm is open every day of the week - up until now it has only been open on certain days causing confusion to many holiday makers who turn up to find the gates closed.
The opening hours are 10am until 8pm then from 16th July it will remain open until 10pm.

The park is now under the management of Grupo Aqualandia Espana - the company that manages Aqualandia water park and Mundomar sealife park. The park was officially opened just over 10 years ago by Prince Felipe, but 5 years after opening the park had accumulated a financial debt of 114 million euros. The company has an option to buy at a vastly reduced rate of 65 million euros due to the debts accumulated thus allowing the Valencian Government to write off the debt from its books. 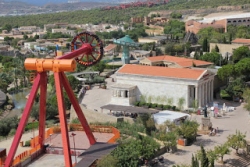 Back in 1992 a public corporation was created, called Sociedad Parque Tematico de Alicante SA to manage 10 million sq metres of land which is the site of the current theme park. The aim of this corporation was to manage the concessions made to private companies to run the different installations which they were planning to build in the area - Terra Mitica, 2 golf courses and hotel complexes. The project was financed with enormous amounts of public money from the Valencian Government, some private investment and massive loans from 2 regional banks. The initial budget was 270 million euros but ended up at 377 million. 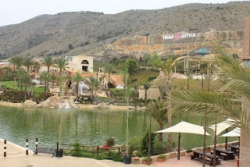 Terra Mitica opened its doors back in the year 2000 with very high expectations but visitor numbers never reached the projected forecast and so the troubles began. Last year there was a long running dispute after virtually half of the staff were laid off at the end of the season.... the dispute only ended after months of protest and was resolved with an agreement over redundancy packages with the employer unions and park management. The park opened in April of this year with only 175 staff to oversee the daily running of the park.

With staggered openings I should think it is extremely difficult for the staff to manage money wise - the park only opens "full time" ie all week, for 12 weeks of the year - predominantly July and August. During April and May they basically open for long weekends then in September and October just on Saturday and Sunday. It must be virtually impossible for them to get other part time work to fit around this pattern bearing in mind that there is 25% unemployment in Spain - youth unemployment is a staggering 50% !

Benidorm is a year round tourist resort and I find it strange that the park does not open all year round. If they want to attract visitors they need to adapt ... you certainly don't see Euro Disney in Paris closing its doors and the weather in France is on a par with the UK - wet!

Within the park they have a new hydrotherapy area which opened this year, with a jacuzzi type pool and water cannons which is free to all visitors - just remember your swimming gear and towels! The park was used as a location for the ITV comedy series "Benidorm" in an effort by the producers to promote attractions in Benidorm.

The one day adult entrance price is 35€ but they are offering the 2nd day free ... why not just drop the price and the they will probably get twice the number of people going! One day is really enough to go around the park and go on all the rides. If you do not have a car then you have 2 options to get there - Public bus or taxi. The two buses which serve the park are No 1 which covers the Rincon de Loix area or the No 3 which cover Villa Joyosa and La Cala Finestrat/Poniente.
A taxi will cost ap 14€ from the Levante area and 10€ from the centre of town or Poniente end.