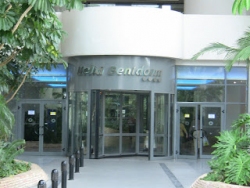 Yesterday afternoon British Consul Paul Rodwell hosted a meeting at the Melia hotel in Benidorm aimed at those that work in the tourism sector. It was also the launchpad to promote the release of 2 safety videos that have been produced locally and authorized by the Foreign Office to roll out and publicize in the lead up to the busy Summer season.

In attendance were representatives from the major tour operators (Thompson/Tui, Thomas Cook, Saga, Jet2) as well as local press editors such as Michelle Baker of Round Town Times, Cathy Humphries editor of The Post, Round Town News and Viva TV.

The meeting was opened by Benidorm Mayor Agustin Navarro and in his speech said he felt it was important to come and say a public thank you to everyone present for building the town into what it is. He acknowledged the key role that tour operators and rep's played to the tourism sector and reiterated that the Town Hall would continue to work along side and help resolve any issues that arise. Six months ago the council signed an agreement for "Special Tourist Police" to patrol the town over the Summer giving a "more helpful and softer approach to policing".

Paul Rodwell then gave an informative presentation on the workings of the Consulate and how best to work together to ensure that British tourists get the best possible support this season. Aprox 3.5 million British tourists will descend on the area which accounts for ap. 41% of arrivals at El Altet Alicante airport!

There are many misconceptions he said about what the Consulate can and can't do - they are governed by guidelines from the UK Parliament and have to abide by these.
Among the main jobs they perform are issuing replacement passports; Help transfer of funds from relatives; Offer help to victims of crime; Support in cases of missing persons, child abductions and death of relatives when overseas.
Things that the Consulate cannot help with are: Getting you out of prison; Giving legal advice; Investigating a crime; Travel arrangements; Lending or giving money out (yes they are asked!)

The most important message he wanted everyone present to publicise and convey to holiday makers was "DO NOT LOSE YOUR PASSPORT"! Two new short video clips that have been made were then screened showing the inconvenience and trauma it causes - and suggestions on how to get this message across were brainstormed.
You can view them via YouTube here:
http://www.youtube.com/watch?v=iugs2LMQkk0


http://www.youtube.com/watch?v=JbmINn8y34k&feature=plcp
Throughout the Summer the Consulate can issue up to 20 passports per DAY. When you lose or have your passport stolen you will have to personally go to the Consulate in Alicante. A taxi will cost in the region of 60-70€ each way. If it has been stolen it has to be reported to either the Guardia Civil or National Police and a police crime number obtained.
You then require a passport sized photograph - there is a photo booth at the consulate and the worse part, 122€ (they take credit card payment). This emergency passport will only be valid for the duration of the holiday you are on and you will have to apply for a full 10 year passport on your return... yes very costly, but these fees are set by the UK  Parliament not the Consulate.
The Consulate is open between 8.30am and 1.30pm and the normal processing time is 1 hour. IF you happen to realise you have lost your passport on a Friday evening and are flying back that weekend it, the process becomes even MORE expensive. The chances are you will have to re-book your flight for the following week as the Consulate does NOT open over the weekend. In extremely extenuating circumstances the Consulate can be called out but the hourly charge to do so is 150€ per hour! The chances of your travel insurance paying for extra accommodation and travel to the Consulate is dependent on which company and policy you have - check the terms and conditions beforehand, if you have insurance that is!
So the main message is look after your passport when on holiday. Do not take it out with you but leave it in a safe place - a good piece of advice is to make a copy and keep that on you.
This and other useful  information can be found on the consular website: http://www.ukinspain.fco.gov.uk
You can also substitute "Spain" for any country in the world ie ukinturkey etc and read about advice for that country too.