If you've ever headed inland from Benidorm, past La Nucia you may have wondered what the silver white meshes are that adorn the mountain-sides.
As you approach Callosa d'En Sarria, where the popular Fonts D'Algar waterfalls are located you will be surrounded by the mesh greenhouses, which protect the crops of nisperos being grown.

A nispero is a soft orange fruit which is like a cross between an apricot and plum but has a double stone in the centre. Callosa is the nispero growing capital of the region but they can also be seen abundantly in the Alfaz and Altea areas. If you pass through the groves at the moment you will see the fruits being picked, however, there will be far less this year.

Growers in Callosa expect between a 25 to 30% decrease in fruit this year as a result of the frosts that hit the region in February - this equates to approximately 3 million kilos of fruit. Fransisco Perez, President of the Agricultural Coop also stressed that the fruit will be smaller and of an inferior quality to last years harvest - all due to the weather.

Last year 3 million euros worth of export sales were lost following the cucumber crisis.  300,000 kilos of nisperos were thrown away after Italy, the main importer of Spanish nisperos refused to take any agricultural products from Spain - as did much of Europe. German authorities wrongly accused Spanish cucumbers to be the source of the E.coli outbreak and it virtually bankrupted many farmers in Spain. 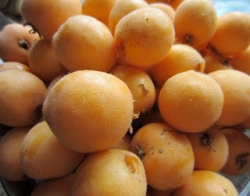 May is nispero harvest time and you will notice that all the local markets will have an abundance of the fruit for sale. Locally you can also find preserved nisperos, nispero jam, a liqueur and even honey.

70% of the workers who harvest the crops in the region are immigrants - predominantly from South America and Eastern Europe. They are long days, lasting 9-10 hours with an average pay of 45 euros per day, which makes it an hourly rate of 5 euros. But there is only a small window of when to pick them otherwise the birds get to them and then they are ruined.

I have a nispero tree in my garden and it produces a huge amount of fruit.... there are only so many you can eat fresh so I made a recipe for a nispero tart, which goes down very well.

Ingredients: 1 sheet of puff pastry defrosted - I buy frozen from Mercadona (they come 2 in a pack called Masa Hojaldre for 1.09€); 100gm soft butter; 100gm sugar; 2 eggs; 100gm ground almonds  and flaked almonds.
Method: Cream the butter and sugar with an electric hand mixer. Add eggs one at a time then the ground almonds.
Spread the almond mix on top of the pastry, spreading to the edges. Next the messy bit. You need to peel the skin off the nispero, cut in half and remove the stones. Place them on top of the almond mix until the entire surface is covered. Sprinkle on flaked almonds and bake at 170 degrees for ap 25-30 minutes. Remove from oven and allow to cool then shake some icing sugar over the top. Cut and enjoy with a nice cup of tea!
PS - If you can't get nispero it works just as well with apricots - I use tinned ones too!

0 #1 Martha 2012-09-15 20:34
That recipe gives me another reason to persist in growing my nispero seeds that I brought home from Spain last summer. My brother in law had a bumper crop and I fell in love with them. My little plants are about 20 cm tall even in this Texas climate. Maybe next Spring : )
Quote | Report to administrator
Refresh comments list