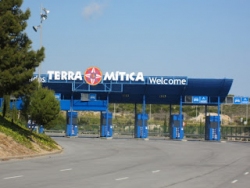 The new season starts today when Terra Mitica opens its doors for the first time this year. The company went through a long dispute with employees after nearly half of last years workforce were sacked, reducing this years staff to under 200.
The park will be open every day from 10am until 8pm over the 2 week Easter period (until Sunday 15th April) but then reverts to opening only over long weekends - starting Friday, Saturday, Sunday then extending gradually until it is open daily from 18th June. This must make it extremely difficult for the staff as they only work full time for less than 3 months as the last full week of opening is the first week of September, after which it is only weekend openings.

This year they have introduced a new attraction - an open air hydrotherapy area with a jacuzzi type pool and water cannons! This area is free to use so remember to bring your swimming costumes ... but it won't be open until the park opens full time in June - as the water is not heated it will be too cold.
Even ITV filmed at Terra Mitica for the comedy "Benidorm" during series 4... it was great publicy for the park and last year they used Terra Natura, the wildlife park next door.
Look out for the many discount vouchers available throughout the resort offering money off the entrance prices.