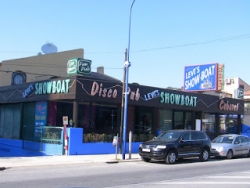 With only a week left till the grand opening of "Showboat" - Benidorm's newest venue and the place to be seen, I decided to pop by and check on progress. 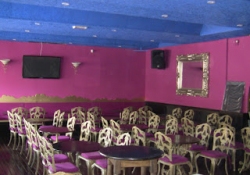 I was greeted by a posse of workmen who were all going about their various jobs - painting, electrical installations, tiling - everywhere I looked someone was banging or screwing (no pun intended there). Wayne kissed me hello and goodbye as he was en-route to the paint shop but told me to browse and he'd be back quickly. The transformation is amazing and everything is falling into place nicely. Walls have been painted ... remember to bring your sunglasses, Wayne doesn't do subtle - why bother if you're just going to blend in!  Considering its nearly there I was shocked to discover that Wayne had only officially signed for the premises today - brave man I say. The satellite company were busy installing connections for the 3 wide screen televisions hung on the walls and testing the sound system ... it definitely works I can verify!
Two burly delivery men arrived with the new kitchen which included a massive 6 ring range cooker - there's going to be some serious cooking going on in there.... remember its all fresh not frozen!

The stage has been constructed for the amazing evening show that will be performed by Miss Levi and the Dream Girls & Boys. In fact, they came in for a rehearsal whilst I was there so I took the opportunity to have a quick chat with them. They have all been specially recruited and hand picked from the UK by Wayne. The team comprise of April from Ayr in Scotland; Alison from Blackpool; Scott from Birmingham and Colin from Brighton.
The two girls are professional dancers that up to now have been performing at the big cabaret clubs in Blackpool and can't believe that they are lucky enough to be here in Benidorm. The 4 certainly make a striking team and have some fantastic routines and glitzy costumes - but I won't spoil it for you.
Opening night is next Thursday 1st March, doors open at 8pm and everyone is welcome to come and help celebrate the inauguration of her maiden voyage and all who sail in her!

There are no secrets to success - it is the result of preparation and hard work. As Thomas Edison said "There is no substitute for hard work" .... I think that Wayne lives by that motto looking at what he has managed to achieve. I am sure everyone will share my good luck wishes to him for next week.