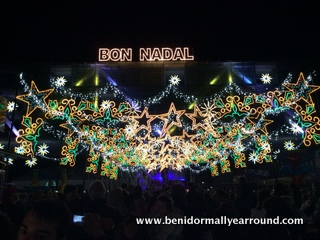 Benidorm is officially on Christmas countdown following the inauguration of the lights in the Town Hall Square on Saturday evening – good job it wasn´t Sunday as the heavens opened and haven´t really stopped since! Good for the locals but not so for the holidaymakers! 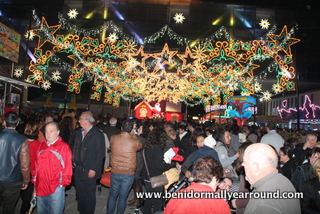 The children were entertained with a theatrical company performing a well known Spanish children´s play – I assume it was well known as they all sang, danced and mimed along with the cast. The Mayor, Agustin Navarro then took to the stage and gave a short speech before inviting the two main fiesta queens to say a few words to the crowds. 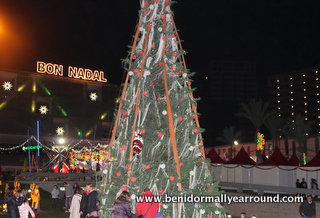 Then they switched on the fabulous Christmas lights in the square and on the front of the Town hall building and there then followed a short firework display – as no occasion in Spain is complete without a few bangs and sparkles! Fortunately as it was dark you could see them... never assume that in Spain - bizarrely lunchtime fireworks are quite the norm here! 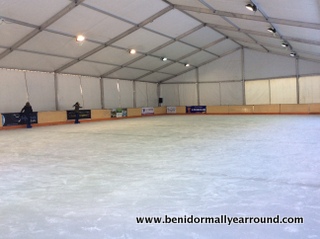 The children then all excitedly ran to the attractions – fairground type rides, trampolines and the newly opened ice skating rink. The ice rink is open from 10am until 10pm daily and costs 6€ for 1 hour, which includes the charge of the skate hire. Gloves are compulsory so don´t forget to bring yours – otherwise you can buy them at the kiosk for 2€. The attractions will be at the square until 7th January, so if you are here with children pop down. There are also a few food stands selling churros,roasted chesnuts, gourmet burgers and fresh fruit smoothies.