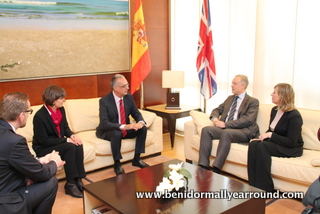 The British Ambassador, Simon Manley CMG, spent the day in Benidorm yesterday as part of a two day trip to the Alicante Province. Sarah-Jane Morris, the British Consul and Lloyd Millen, Vice Consul who is based in the Alicante Consulate, accompanied the Ambassador on his visit.

On Wednesday they travelled down to the Orihuela Costa, where they hosted a meeting with the Mayors of eleven local Town Halls, among which were Benidorm, Alfaz del Pi and Calpe. These towns represent 50% of all British ex-pats registered in the Alicante Province and 21% of the total in Spain. One of the key points of discussion was the importance of getting British nationals to register on the pardon – which in turn has a direct impact on healthcare provisions available, as funding from Central Government is allocated on these figures. Both the Ambassador and Consul affirmed that although Britons cannot vote in the National Elections here – that would need a directive from Brussels which would affect all Europeans living in other member states, they can and should exercise their rights to vote in the upcoming local elections. In addition, those that left the UK less than 15 years ago and were registered in a UK constituency are still eligible to vote in the UK elections – but must register at http://www.gov.uk/register-to-vote 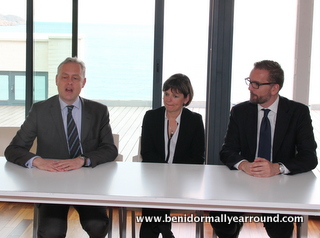 A characteristic prevalent of the British, is their desire and willingness to help in the voluntary sector and something that both the Ambassador and Consul want to encourage more of, saying that it a great way for the communities to integrate. It is especially important as many expatriates lack a family network when moving from the UK and the close working relationship formed between the voluntary groups and Social Services in these towns is crucial to assist vulnerable Britons. 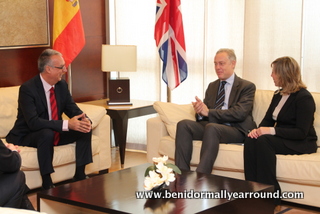 The group were officially received by the Mayor, Agustin Navarro at his office in the Town Hall where the Ambassador welcomed and congratulated the Mayor´s efforts on Benidorm´s success, especially looking at the number of Britons who flock to the resort every year. Taking these numbers into account, the crime rate is actually very low, but for those that do become victims, the facilities of the SATE office are exemplary. 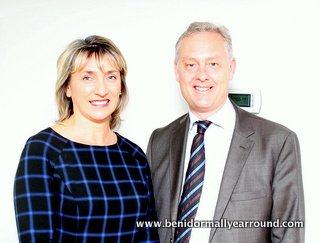 One point, which they highlighted though, was the discrepancy between police crime figures and those at the Consulate. Many Britons fail to report a crime of theft to the police unless they are going to make a claim on their travel insurance. Numerous applications for emergency travel documents had not been reported to the police as it is deemed too complicated and time consuming by the holidaymakers. I discussed with the Ambassador problems faced by both the police and those unfortunate enough to become victims at the Tourist Information office. There is a facility to report crime online and more information is available at http://www.policia.es/denunweb/den_tel_in.html as well as Mobile app – look for "Alert cops" in app store/google play store 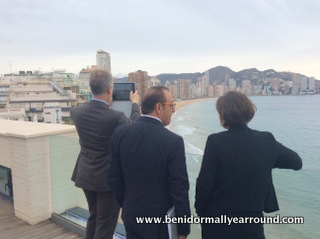 It was a shame that the weather yesterday was a little grey and overcast - but it didn´t stop the Ambassador from taking some panoramic shots of the Levante beach from the top of the Tourist Information Office. He needs to pop back in the Summer and see the resort at its best, when the beaches are packed - he told me that the AVE from Madrid to Alicante was excellent so no excuses! The group had a working lunch at the Hotel Servigroup Calypso and where joined by the Mayor plus heads of National and Local police. Next week Sarah-Jane Morris and Lloyd Millen will be meeting car hire operators at Alicante airport to discuss ways of improving safety for those renting cars as there have been a number of instances of newly arrived holidaymakers being robbed of baggage as they head to their hire cars.