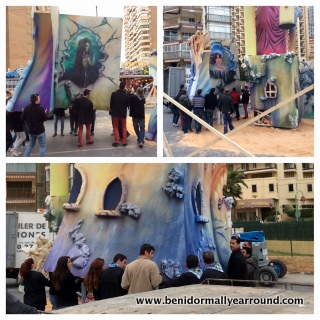 If you had an aerial view over the Valencian community at midnight tonight you´d think that there was some kind of forest fire. But no, the beautiful fallas go up in smoke tonight. It must seem bizarre to the Brits to watch these beautifully crafted models, which cost thousands of euros to construct and decorate being burnt. They were put in place over the weekend and it took many many hands to offload them from the massive lorries. Crowds watched as about a dozen men lifted portions off a plant trailer and slowly shuffled along the road with them.

Money up in smoke! 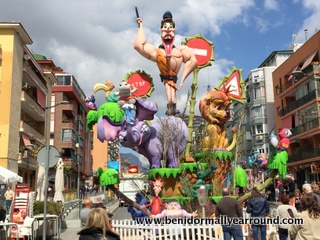 But tradition is tradition and one that happens every year – with tonight the climax of the week long fiesta. There are 3 located around the resort – one at the Rincon, in front of Burger King, where there are also some fairground type rides for younger children. The next is at the end of the Avd Mediterraneo and start of the pedestrianised Calle Gambo and the last is in the Old Town – on Calle Tomas Ortuno, which also has some children´s rides. 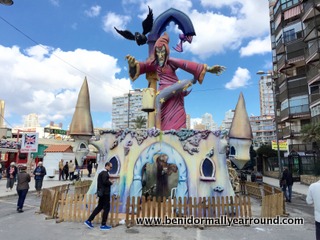 At 6pm tonight there will be a grand float procession through the streets of the Old Town – starting just past Dove Park going up then down the Avd Ruzafa and finishing on the Avd Mediterraneo, just by Don Dino toy shop.Today is a Bank Holiday in the Valencian community and many shops as well as banks and Government agencies will be closed. 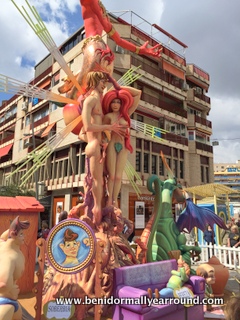 The burnings take place late – the children´s one first at 11pm in all 3 locations. Then the big ones are set alight at half hour intervals… just in case you fancy running around to watch all of them (or perhaps it is because there is only one fire engine which has to cover all 3!) Starting at midnight will be the one in the Rincon de Loix followed at 12:30am with the one at the triangle and lastly, the one in the Old Town. Everyone always pushes to be right at the front, but trust me, once it is lit the intense heat quickly has everyone stepping backwards – that and the water spray from the fire hoses! It will be chilly so wrap up warm. I just hope it doesn´t rain again like last night and that they are not too wet to be ignited now.