Benidorm Fallas go up in smoke 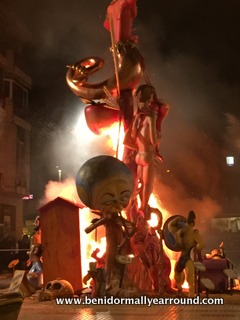 Despite the rather adverse weather conditions, last nights burning of the fallas still took place in Benidorm. However, it wasn´t until the very last few minutes that the “bomberos” - firemen, gave the thumbs up.

Strong winds throughout the day bought uncertainty as to whether it would be too dangerous to go ahead – but thankfully all three went up in smoke at the allotted times.

Crowds gathered, although probably not as many as last year, but still all nudging to get to the front. 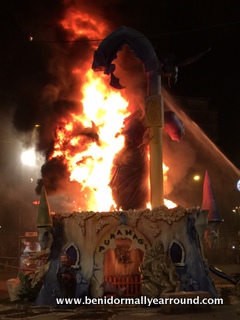 Accelerant was poured over the figures to ensure that they burnt and fire officers stood close by, with hoses in hand. The Mayor arrived with the fiesta queens to the one at the Rincon just approaching midnight and lit the line of mascletas – firecrackers, which were wrapped around the statue to set it alight. It took a little while to get going, probably because it was damp from all the recent rain, but once it took hold the dense black smoke started pouring out. Im not too sure quite how damaging it is, but the rancid smell of burning polystyrene permeated the air – I just hope that nearby residents remembered to shut their windows! 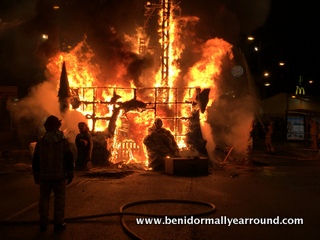 It is certainly quite unique to watch – and something that Health & Safety in the UK would most definitely never allow. Organised firework displays in the UK on 5th November dictate that crowds stand, at a guess, some 100 metres away – last night I doubt that it was much more than 10!

It is certainly worth going to experience – for those that didn´t go, watch the link below showing the fire taking hold and structure falling over.