The madness of San Juan 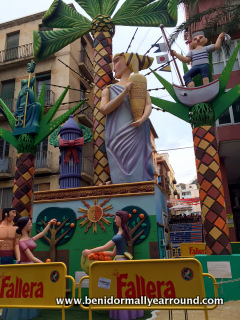 The traditional San Juan fiestas took place across Spain – and last night, the eve of San Juan, many headed to the beaches to celebrate as is customary. Up in Alicante the streets were adorned with hogueras – monuments like they have during Fallas time in March, which were burnt on the streets. They had been up for some days for people to admire, but the consequence, as I found out to my cost is that most of the streets were cut off. The lesson I learnt is to never drive up to Alicante during San Juan unless you want to spend half an hour driving down one way streets, the wrong way as most had been closed! 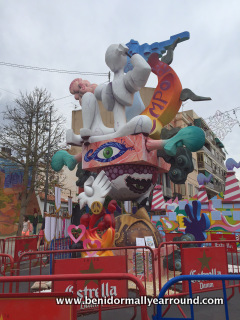 The winds were pretty gusty and the firemen had to remove parts of the larger monuments before they were set alight – they were located virtually next to buildings and palm trees, so a real risk of setting those alight in the process. It is certainly worth going up next year to admire them in the days approaching 23rd June – I couldn´t believe how many there were scattered around the city…. And they say that there´s a recession on! But if you really want to see some fabulous falls, then head to Valencia in March - the burnings take place on the night of the 19th. 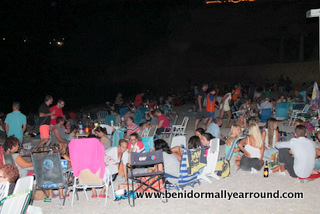 Back in Albir, the beach started getting busy by early evening, with people descending carrying tables, chairs and cool-boxes. Albir was one of the only beaches which allowed a bonfire to be lit and so attracted many visitors for the spectacular. The night market was open in the car park in front of the Frax Foundation – which is on every evening from around 6:30pm until after midnight and will remain there until September. 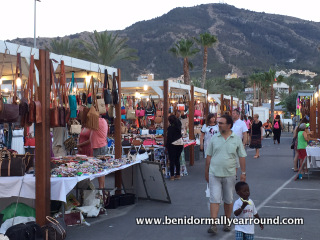 There is a large children’s area, with lots of rides, trampolines and amusements for them plus stalls selling the usual market wears and tears – bags, clothes, accessories etc. Further up the promenade, beside the anchor, the artisan craft market was also open, selling traditional hand made goods. 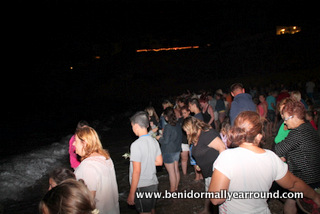 Everyone was in good spirits, partying away and as midnight approached everyone started heading towards the shoreline. At the stroke of midnight the lines turned around and walked in backwards – well when I say walked in they paddled up to their ankles in most cases, although a number did go in completely! I managed to wet my toes, which was quite enough for me – as there was a slight breeze the water felt pretty cool shall we say. 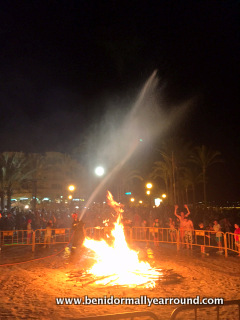 By the time everyone had congratulated themselves on their bravery getting in the bonfire had been lit. The firemen were on standby, with hoses in hand and controlling the flames, dampening down the sand surrounding it. Every so often the crowds – or rather the children in the crowds, would shout “aqua” and the firemen directed the water into the crowds, drenching them to squeals of delight! The group of local police standing close by to me chuckled with laughter – until the hose headed our way and they couldn´t run fast enough. But they took it in great spirit, joining in the festivities with the crowds – I really couldn´t imagine that happening back in the UK! 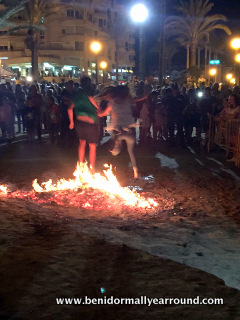 Once the fire began dying down the firemen started preparing it for those brave enough to jump over. It was actually still fairly strong when the first ones jumped – but a fireman stood ready to douse water in case it got out of control.Groups of children watched, egging each other on and groups of girls ran together, hoilding hands.

It´s complete madness – but loved by everyone. Same time, same place next year…. If you haven´t been you really should make the effort to experience one of the many Spanish customs. 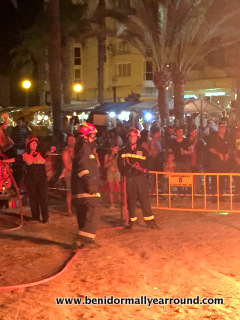 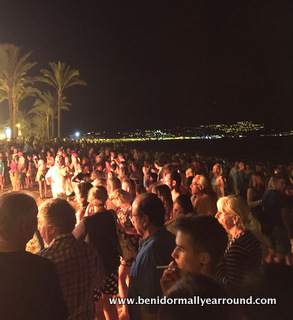 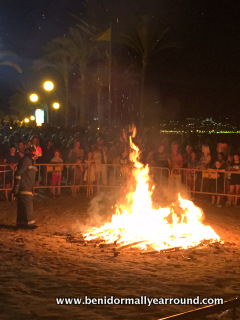 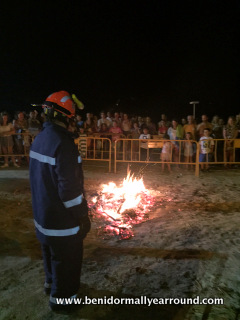