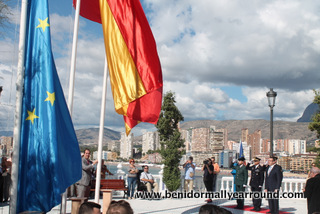 The month begins with not one but two Bank Holidays here. Today, October 9th was a regional holiday – “Dia de la Comunidad Valenciana” or the Day of the Valencian Community. It marks the anniversary of the capture of the city of Valencia by King James I from the Moors in 1238, which at the time was an independent kingdom– and did not become part of Spain until 1707. It was not officially recognized and celebrated until 1976, when the Valencian Regional Government decreed it a Bank Holiday – the year after Franco died. 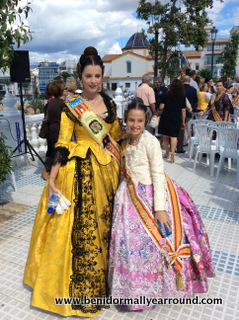 Many towns, including Benidorm marked the occasion. Members of the Council, Police representatives and dignitaries all attended a ceremony up at the Mirador in the Old Town at 12 noon. All the beautiful fiesta queens came, dressed in their magnificent outfits and the band of the “Conservatorio de Musica” turned out in force, playing some splendid pieces. To mark the beginning of the event, 3 flags were raised – Spanish, Valencian and European as the band played the National Anthem, with all the police representatives saluting. 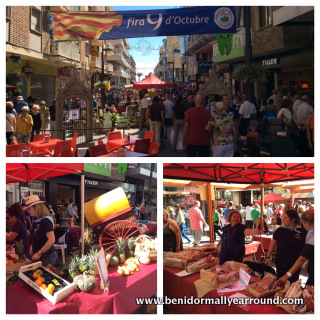 Afterwards they all walked down to the “9th October Fair” – at the top of the Calle Gambo, where there were stalls full of local produce and even showed craftsmen making local delicacies such as turon. The market will be on until Sunday. The second Bank Holiday falls on Monday, 12th and is a National Holiday – “Dia de la Hispanidad” and all banks, post offices, council buildings and some shops will be closed…. but you can be fairly sure that the numerous Chinese shops will remain open! 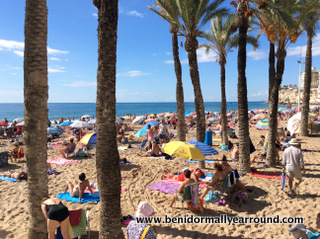 The beach was certainly packed out today with many taking the opportunity of a 4 day weekend to chill out and catch some rays. The sun shone and thermometre hit the high 20´s - not at all like back in Blighty my guess... but there were plenty of Brits raising a glass or two in the many bars along the front!