Benidorm gets into Christmas mood 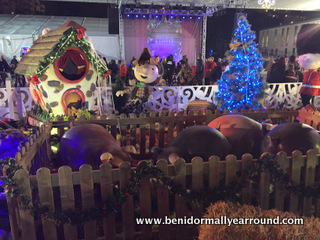 Christmas has certainly now arrived in Benidorm, marked by the lights being officially switched on at the Plaza de Navidad – meaning Christmas Square (The Town Hall Square). This extended Bank Holiday weekend has seen an influx of people into the resort and you can almost feel the buzz and excitement in the air. 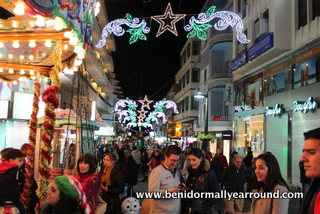 The Ice Rink, installed in a giant marque under the Town Hall is open and for the first year, a giant Christmas Tree takes pride of place in the middle, surrounded by Christmas characters and children’s rides around the perimeter. The obligatory churros truck, with the smell of freshly frying churros wafting across the square quickly attracts queues of people throughout the evening. 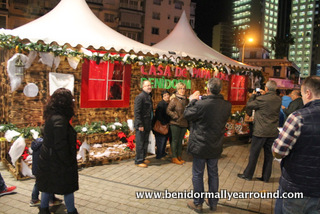 But it is not just confined to this small area. This year, the Calle Gambo has a variety of rides down the entire length – with Santa’s Grotto at the far end nearest to the Avd Mediterraneo. During the week they are all open from 5pm until 10pm and at the weekend additionally from 10am until 3pm, where they will remain until December 25th. 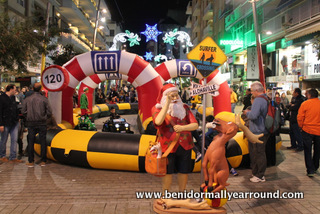 For those wanting a little more tradition head to the Museum Boca de Calvari – located about halfway down the walking street and opposite the start of Calle Santo Domingo – Tapas Alley. On the ground floor is a giant Nativity Scene and upstairs is an exhibition of the history of children’s toys featuring classics such as scalextric sets and dolls houses.