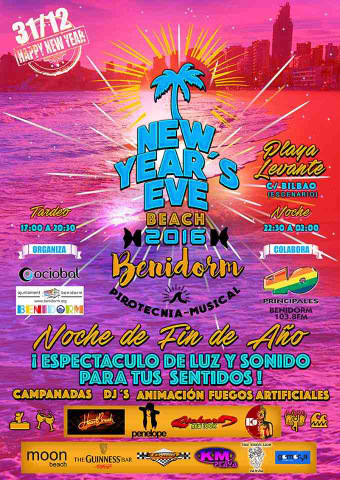 Well the end of the year has nearly arrived - and countdown to the new one is on. It´s been a tough year for many, money is tight, jobs are scarce and bills appear to be constantly risings. Everyone will be looking forward to a fresh start, making those New Year resolutions with extra determination this time around. Here in Spain there are many traditions and superstitions on New Years Eve, with certain rituals performed religiously in the hope of bringing luck, with the most established the twelve grapes. 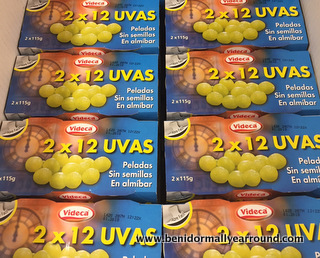 This has been a tradition in Spain since 1909 thought up, unsurprisingly by the vine growers in the Alicante region! That year they had a bumper harvest and didn´t know what to do with them all and some bright spark came up with the 12 grapes at midnight idea, which has been carried on ever since. You will see many supermarkets selling tins of peeled seedless grapes especially for the night. At the stroke of midnight, each time the clock chimes you have to eat, or rather swallow a grape and if you manage to consume all twelve grapes by the twelfth chime you will have good luck for the next 365 days. 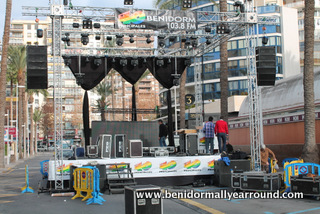 Many will head to the main square in their town, laden down with grapes and bottles of cava to pop open and toast in the New Year. Traditionally here in Benidorm people headed to the Town Hall Square, but this year official festivities have moved to the Levante beach front, by KM and Daytona. There is a giant stage and eight screens along the promenade, which will broadcast music and promotional videos from 5pm until 8:30pm then a DJ will entertain until 2am. The Town Hall are handing out 2000 packets of grapes to swallow at the chimes of midnight followed by a spectacular firework display to mark the beginning of 2016. 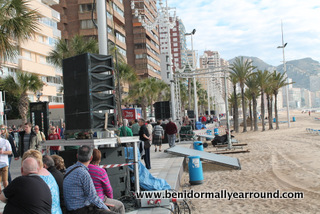 Most of the bars will be hosting special events, with live bands and entertainment – and Miss Levi will be marking her comeback at the Zodiac Bar, bringing in the English New Year at 1am. Many will still head up to the Mirador in the Old Town, where there is always a great party atmosphere. Altea is another good place to go – up by the church square where they have in previous years had a live rock band and fireworks. The clock at Puerto del Sol in Madrid will be televised on Spanish television for those performing this ritual at home with friends and family - similar to Big Ben in London and all bars and restaurants will be tuned in across Spain.

But in addition to the twelve grape ritual there are many other good luck superstitions in Spain. Another very popular one is to wear something red - traditionally a colour that symbolizes prosperity and many chose to wear some red underwear when going out tonight! There are many others and each region tends to adopt their own - eating lentils, a tradition originating from Italy will bring prosperity; Lighting different coloured candles around the house; Leaving on all the lights in the house... that sounds like one thought up by Iberdrola to me! Filling a bucket with water throughout the morning then throwing it out of the window at midnight; Placing a gold ring in your champagne glass when toasting in the New Year - but careful that you don´t swallow it.... I bet the emergency departments at the local hospitals see a few cases each year.

Whatever and where ever you celebrate have a safe and one- and as they say here "Feliz Año Nuevo!"