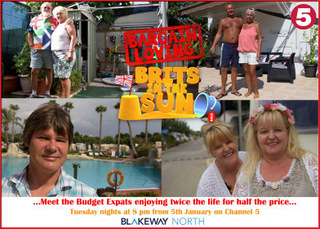 The Channel 5 documentary series “Bargain Loving Brits in the Sun” made by Blakeway North has proven to be very popular both here and in the UK. Feedback from locals that actually live here is positive, with many commenting that it is at last showing a truer reflection of the resort. This 8 part documentary series was filmed in the resort and started in May, lasting until the end of the year and there are only 3 episode left to watch. 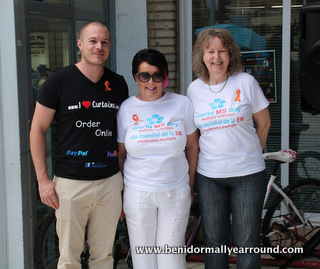 This week saw the multi hair coloured Vikki Caton, owner of Hepburns Hair and Beauty salon organizing the summer MS fundraising Day at the Indoor Market – which raised over €1,100. This was in between managing her salon, radio presenting on a Saturday morning – although she is no longer at the station featured Vikki continues her radio career at Fresh Radio Spain and also, yet to be featured, her new venture – Sparadise, a luxurious Spa, Fitness and Beauty centre which will be on the last episode.

It also had heartbroken 21 year old Ben who had recently split up from his girlfriend, Raj, owner of the Clay Oven – diversifying from Indian to Italian cuisine and outrageous octogenarian Grace Campbell, who dived into the campsite swimming pool fully clothed! Super saver twin sisters Catherine and Patricia Wright also showed how they can live on next to nothing at Villamar – noting down their daily spend, which on one day was only €1… think a few I know could pick up some tips from that pair. There did seem to be a heavy emphasis on those living on a campsite – please note that there are many more here that live surrounded by bricks and mortar! 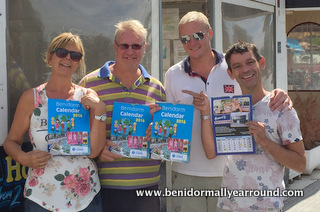 There are only three more episodes to go and next week, February 9, episode 6 will feature Wayne, Des, Paul and Jackie who produced the cheeky Emaus charity calendar - which raised an incredible €10,000, locals Barry and Barbara who go on one of the resorts famous free blanket trips and Round Town Times editor and Orange Grove campsite owner Michelle Baker. 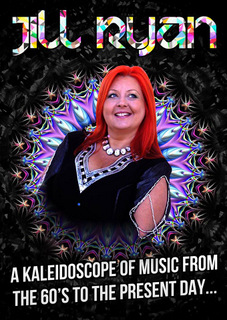 The last is popular Benidorm singer Jill Ryan, who I met up with to see how she felt filming went and if she and wife Maria are looking forward to next week… or will they be watching from behind the sofa. They saw this weeks episode together with 82 year old Grace at a local bar but have yet to decide where to watch! The pair have been in Benidorm for three years now and basically came here by accident – their intention was to go to Portugal, but they never quite made it. The couple, who have been together for 17 years - married for 10 of those, ran a pub in their native Wigan.

Jill has been singing virtually all her life, touring across the North West of England as part of a rock show. The pub game is a hard one and they only had one day off per week – Tuesday. Living above the shop so to speak, they bought a caravan on Ebay for £800 and spent that cherished day off driving out to the beautiful surrounding countryside. After six exhausting years they made the decision to sell up and unexpectedly, virtually sold on the spot. So with new landlords installed, they decided to hook up the caravan and take a road trip. They made their way down through England, hopped onto the ferry and ended up in the South of France. 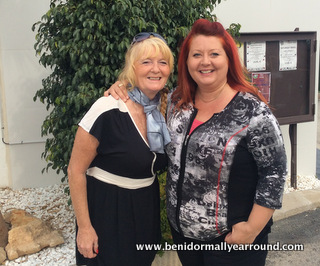 Jill won €350 at a karaoke competition and it got the girls thinking that perhaps they could give it a go. They ended up in Salou, working a season, but found that come October the resort basically closed down – so off they went, with the idea of Portugal but instead came across Benidorm…. and are still very happily here.

Whilst Jill is out performing, with regular slots at Showboat and Whitestar, Maria gets on with investigating – she is a genealogist, compiling family trees for people – for a moment I thought she said another similar sounding profession and by the peculiar look on my face she quickly reiterated what she did! Maria also does a lot of work for the Children of Emaus, fundraising and organizes the monthly ‘Big Drop’ at various campsites. The money collected is then used to buy provisions they need – she will speak to the staff and ask what is required, so freeing up their small amount of money to pay for other essentials. 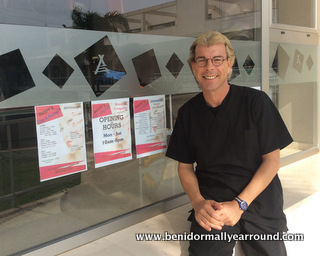 The following week, February 16, episode 7 will see Paul and Jackie from Foley’s Bar, Kim and Craig who run a caravan maintenance company and winter birds Pauline and Eddie, who flee the UK to spend the cold period here in the sun. Another is outrageous character James Gibson, a demure hairdresser by day but Miss Dusty Crack – yes really, a drag queen by night and really the polar opposite of his alter ego. He has just opened his own salon, appropriately named Dusty’s at Almafra camping in Alfaz del Pi - the name is dedicated to his love of Dusty Springfeld.

James has been in Spain for six years but I was gobsmacked when he told me that back in the UK he was a cancer nurse … see, never judge a book by its cover! After leaving school he joined the army, following in his father’s footsteps but sadly was deemed to short to continue with the Grenadier Guards. After his passing out parade he joined the nursing core, where he was trained and stayed for six years – very fulfilling, but emotionally and physically draining. His sister is a hairdresser and she bet him that he’d never be able to follow in her shoes – so not one to give up a challenge he went to training college and is now fully qualified. 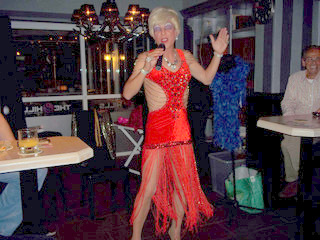 But drag queen – how on earth I asked. Well, he was in the Old Town and the venue had been let down by the resident queen so as a joke asked for any volunteers… and three years on, he is in his element! He initially worked in Queens, dueting with Will Sparkle where they were known as The Crack Sisters so wanted to maintain the association, hence came up with Dusty Crack. During his time with the film crew they followed him into a local charity shop looking for an Amy Whinehouse type outfit for one of his acts, causing much hysteria.

Partner David is a chef – they do plan on hopefully getting wed this year and their long term dream is to buy a plot of land and become self sufficient, growing veg and keeping livestock, adding to their brood of 4 dogs, 2 cats and 2 budgies! You can catch him performing his routine in heels and sequins at White Star, Buddies and Rio Park throughout the week – a real feat as he cutting and colouring Monday to Saturday from 10am until 8pm! He manages around eight changes in a show, obviously starring Dusty, but also does Cher, Lady Gaga and Amy Whitehouse to name a fraction. James is hosting an official opening night party at the salon this Tuesday, 9th between 7pm – 10pm, inviting all for a glass of cava and nibbles.

Blakeway North certainly managed to find some interesting characters to feature in this series and the final episode, on February 23 will feature Wayne and Des’ wedding in the UK and a compilation of characters from all the previous episodes – lets hope they come back again next year.