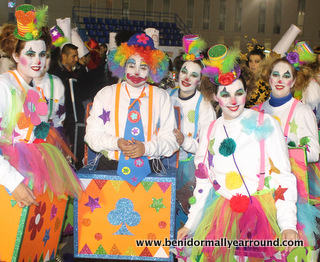 It must be said that the Spanish certainly know how to party and Saturday nights Carnival Parade was a prime example. This year over 800 took part, with 56 individual penya’s vying for the top prize of €1000 for the winning fancy dress costumes. I think that they should pop down to the British Fancy Dress Day in November to get some ideas for next year.

There were two categories - individual and group. Although prize money for the group was bigger, it was €300 for individual, you stood a far better chance as there were only eight entry’s and you’d get to keep the lot! 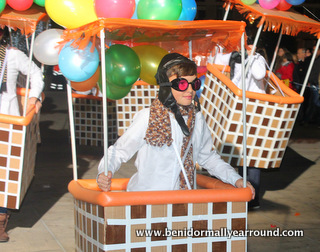 The procession started a little after the 9:30pm advertised start time, which is good going here, from the top of Calle Ruzafa. The main street leading down to the Town Hall Square was awash with locals and tourists jostling for pole position – cameras in hand ready for the action. Massive speakers had been erected along the entire route and the volume from the beat could even be felt vibrating through the pavement! 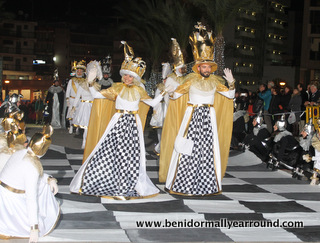 Revellers took in the atmosphere, dancing and swaying, but many of the older spectators held their fingers permanently in their ears to try and drown out the sound… it was very loud.
There were some very imaginative costumes, with a lot of thought and work going into most. 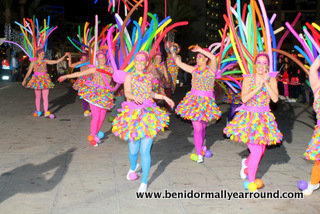 Although the children’s parade took place earlier in the day, many still took part in the main one. A panel of judges sat marking each group, which were announced as they presented themselves to the panel – with some performing a little routine in the Town Hall square. 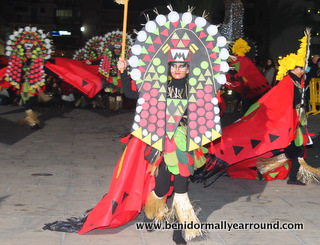 Even the Mayor, Toni Perez and his councillors got into the spirit and dressed up as eskimos – I couldn’t see an MP doing the same in the UK. The winner of the individual costume went to the ‘Queen of Fire’, picking up €300 and the first prize for the group category went to ‘The Chess Set’, who picked up €1000. 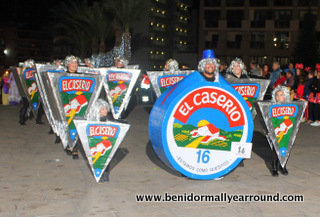 Many of the participants had snacks then headed to the giant marque – equipped with a well stocked bar, where a band and DJ ensured that the partying went on well into the early hours of the morning. I do feel a little sorry for those living in the apartment blocks surrounding the square, but then I suppose – and hope that most were down there with the crowds.