End of the Benidorm Fallas

The Benidorm Fallas went up in smoke last night to the delight of spectators – but bewilderment of holidaymakers! Although a long established tradition, many are still aghast that so much effort and money is put into building these beautiful structures, which are only on display for 4 days. 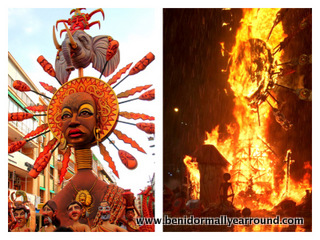 The children’s models were first to be burnt – at 11:00pm followed by the main adult ones.

The Rincon was set alight at 12 midnight then the one at the end of Avd Mediterraneo at 12:30am and lastly, the one in the Old Town at 1:00am. 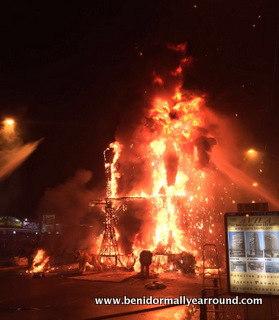 The firemen, standing with hoses poised ready to dowse down the flames were suddenly called into action after falling embers landed onto one of the fiesta queens and they quickly aimed their water at her. Fortunately her heavily embroidered dress did not catch fire but she was somewhat startled and shocked from the incidence so was escorted to the nearby Cruz Roja ambulance. Spectators are always trying to inch closer and closer to the action but this just goes to show that accidents can and do happen. 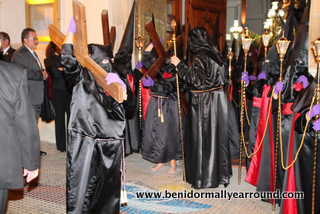 Now with the Fallas over and done with, this coming week will see almost daily Easter processions through the streets of the Old Town. The most startling one for visitors is on Good Friday, when ‘The Brotherhood” march from the San Jaime church in their cloaks.