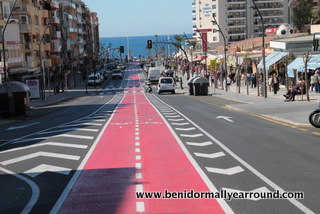 The old adage “if it aint broke” springs to mind on hearing that expansion plans for the controversial bike lanes in Benidorm have been put on hold. Even before completion of the bright red lane in the middle of Avd Jaime 1 in the Old Town, many were already expressing concerns about the logistics and safety. 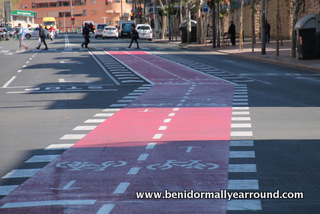 Pictures of the red route running through the middle of a roundabout caused much ridicule on social media at the beginning of this year – but the Councillor for Transport, Ramon Gonzalez de Zarate insisted that the centre of the road was the safest place for cyclists. 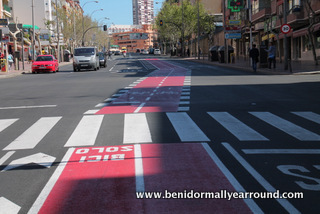 Now there appears to be a U-turn by the ruling PP party and the council have put a ‘temporary’ halt while they ‘have a period of consultation with users’! The opposing parties – namely the PSOE, Ciudadanos, Liberales and Compromis-Verde have all joined together to force the council to delay further implementation until a proper study has been carried out. 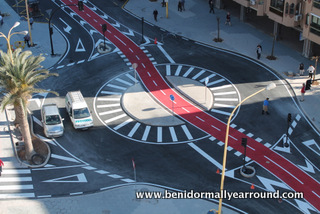 One would have thought that this study should have taken place PRIOR to embarking on the project – which has caused major traffic disruption to locals. Even bikers have expressed reservations about the layout, which they have said is ok if going straight but a real hazard when turning, as you have to cross over the flow of traffic.

For experienced bikers this may not be such an issue, but for those that perhaps have hired one of the city bikes and are less familiar, it’s an accident waiting to happen. If it is concluded that it is indeed unsafe the council will then have to spend more time and money sandblasting the red lanes off!

+1 #2 Peter Townsend 2016-04-10 22:08
As an avid cyclist and one who has used the Benidorm city bikes I can only say that this red cyclist path in the centre of the road does not seem a good idea. Any car that might overtake even static or parked cars or buses could stray out into the middle of the road and possibly hit a cyclist or cause a cyclist to veer to avoid a possible collision and that in itself might cause an accident.
The best place for these red cycle paths is at the side of the road, provided that these pathways are not blocked by parked cars. I can understand that a red cycling path in the centre of the road avoids the problems of parked cars and makes cyclists more visible. It is obvious though that it also exposes cyclist to greater risks being next to the faster part of the road. I also ask the question as to how a cyclist can safely access and leave such a central lane in busy traffic?
Quote
+1 #1 Sheila Fearon 2016-04-02 18:22
Thank goodness, somebody with a working brain cell in the city! They are the most dangerous and stupid idea for ages.People use them when they have no idea about when and where they can go, they just ride straight across the road when the lights are on red and think they have total priority over anything on the road------best of all, it is costing a small fortune to make them for users who do not pay a cent towards road upkeep or even have insurance!! At least make them pay a road tax and have some form of insurance as all of the rest of us have to
Quote
Refresh comments list