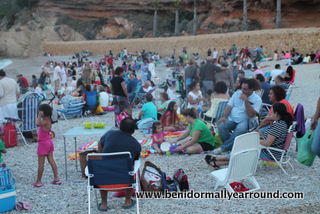 Beaches up and down the coast will be packed with revelers tomorrow night – Thursday 23, to celebrate San Juan, an ancient Spanish fiesta. Originally a religious festival it has now become diluted and is basically a night of celebration and fun with friends and family…. and as we all know, the Spanish certainly know how to party! 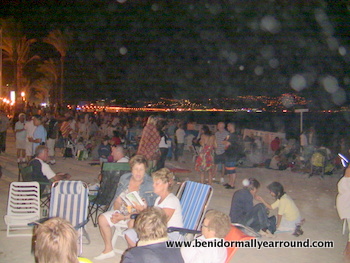 Benidorm Town Hall have announced that they will be erecting a huge stage on the Levante beach, near to the Guinness Bar, with DJ’s blasting out music from around 7pm onwards.
Many will head to La Cala and Albir beaches, where people start descending from around mid afternoon laden down with tables, chairs, picnics, drinks – in fact, virtually everything bar the kitchen sink. 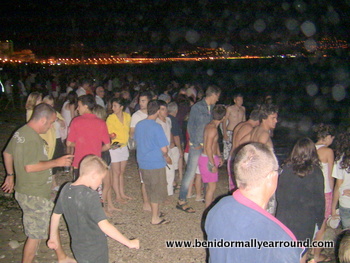 It will certainly be an amazing atmosphere, with music blaring out and people dancing on the sand until the early hours. The highlight of the event is at midnight, when many go into the sea, part of a ritual, which is meant to ward off evil spirits and bring you luck for the coming year. 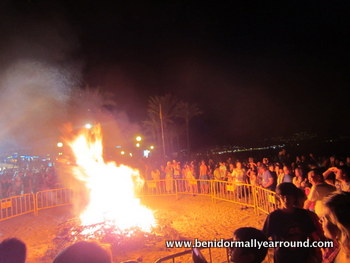 The eager and brave ones will be in their swimming gear at the front, when at the stroke of midnight will plunge in ....the majority will be looking on bemused and opt to paddle – I am in that group! It will be pitch black yet there are no "Elf and Safety" officials preventing you here... don´t think that they would get very far to be honest. Some walk in backwards, some dive straight in – definitely something to experience.

Although bonfires are banned from the beaches, Albir Council have allowed an “official’ one to be built near the anchor for the last few years. At the stroke of midnight it is lit – you have to decide it you are going to be at the shoreline or around the ‘hoguera’. 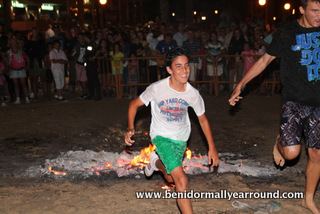 Firemen are on hand to supervise and as the flames dies down they will rake up the remains, hose down the surrounding sand and allow people to jump over it - always on hand with the hoses spraying water. Age is no barrier – children, by which I mean under 10´s, lines of teenage girls, families linking hands all have a go.

My goodness, you couldn´t in a million years imagine that happening anywhere in the UK! It’s lovely to see that Spanish traditions are still upheld and not banned – if you are about pop down and join in.