Forget the peamen - Fine the punter! 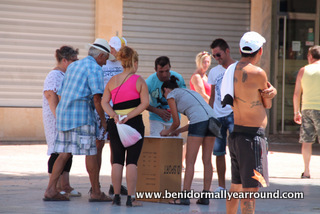 The peamen – sometimes also referred to as the potato men are the scourge of Benidorm and should be given a very wide berth. They operate in gangs, usually on busy thoroughfares such as the Levante promenade, on the Avd Mediterraneo or around the Indoor Market.

They entice people to stop by shouting and cheering, waving €20 notes that they have supposedly just won by guessing which potato half the pea is hidden under – hence the name. But the ‘crowd’ is actually members of the gang, some of which are Brits to make it look more authentic. 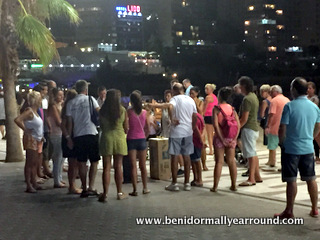 All nationalities have fallen victim to this crime, not solely British holidaymakers and locals here have been complaining about it to the police for years and years. The gangs have lookouts that whistle when they see the police approaching and disband, but quickly reassemble as soon as they have passed.

It is very much a game of cat and mouse, with the local police saying that there is nothing they can do apart from confiscate any money found on them and issue a fine until a change in the law has been passed in Madrid. The police know exactly who they are already.... one politician even said they know the colour of their eyes and names of their children! But what hope of a change in law when the country does not even have a ruling Government and it looks like the Spaniards will be going to the polling stations for the third time in a year - on Christmas Day! 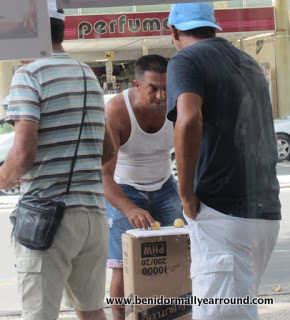 But shockingly one of the opposition parties has proposed fining those that stop to take part – ie the victim, stating that if people do not stop and engage with the scam then the problem will go away! Fortunately the Councillor for Security, Lorenzo Martinez doesn’t seem to agree on that and said that it would be a double tragedy for the victims – once being scammed by the gang then on top of that being fined. Next they will be suggesting fining those that have been mugged for wearing a watch or carrying their wallets with them! 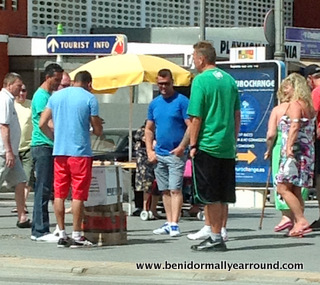 If the police here adopted the British system of patrolling on foot, especially in the areas where the gangs congregate, then the situation wouldn’t disappear but certainly decrease. Apart from the temporary beach police who do walk up and down the front, the rest of the force appear to have an aversion to walking, instead sitting in their cars and driving around.

In order to get funding for more police from central government then two things need to happen. All residents must register on the pardon at the Town Hall and secondly – the one which applies to holidaymakers, any crime, no matter how small needs to be reported to the police – and ensure that you are given a report and crime number. Peamen and especially pickpockets are not exclusive to the Benidorm – ALL resorts and city centres have their fair share. The problem is far worse in say Barcelona and London but simple precautions, such as not taking too much cash out with you, leaving your passports behind and not wearing any obviously expensive jewelry will hopefully lessen your chances of being targeted.

0 #3 Irishgirl 2017-07-17 10:51
The dsrk haired guy in the photo is psrt of the gang. I was robbed just down the road from the Police station where this gang was opersting. They depersed when I went back and started shouted at them. I spoke to police also who daid to phone when I nect saw them. Well I daw the fark haired fella and confronted him and he denied it all. I am learning Spanish which really helped. I followed him and saw him talking to his boss. I again confronted them both and msde a huge fuss in the street in both Spanish and English and warned all the touridts to stay away from these thieves. When i hot my phone out to call the police the dark haired guy said no dont, hrre is your money. I am nearly 60 years of age and have no time gor scumbags who were robbing all the elderly drunk tourists with this pea game. They are experts at getting people involved so stir clear.
Quote | Report to administrator
+1 #2 Tony Power 2016-10-19 09:31
This is a two tier scam the one not mentioned is the gang also is made up of pick pockets! pick pockets operate best in a crowd! They make their own crowd so if you stop and look the gang will circle you and then try and dip your bag or pockets! So the advice is good Just keep walking preferably on the opposite side of the road.
Quote | Report to administrator
+1 #1 paul 2016-10-04 09:33
Whilst on holiday in Benidorm I have stood at watched these people, from a distance, and I have to say the operation is very slick even though they are not liked by anyone. That said this is a really silly situation to be faced with. But I agree with you in that if people did not get involved then they would simply go away.
Quote | Report to administrator
Refresh comments list