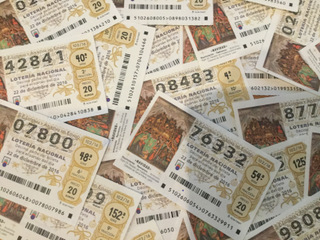 There is exactly a week left until the El Gordo Christmas lottery is drawn on December 22. El Gordo, meaning "the fat one" is an annual event held in Spain and sends Spaniards into a state of hysteria. I have never known such a gambling nation and queues form outside lottery shops and kiosks daily in the lead-up to the day.

It is managed by the Government under "Loterias y Apuestas del Estado"- the Spanish lottery organization. 30% of the ticket sales go to the Government in taxes and the remaining 70% is paid out in prizes, meaning the more people that play the bigger the jackpot. It is a win win situation for the Government as any winnings over €2,000 are also subject to a 20% tax. 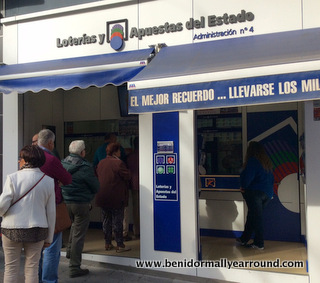 Tickets are also sold online and purchased by four in five Spanish residents - all hoping to win "a slice of hope". The El Gordo has become a self perpetuating success - the more tickets sold the bigger the prize fund... no-one can resist the lure of a share of the jackpot! It is not like the Euro Millions where you have the option to pick your own numbers, the El Gordo are pre-printed with a 5 digit number and nativity scene, which changes every year and cost €20 for a single ticket. The sets of tickets can be seen hanging at lottery outlets all over Spain and certain "lucky" numbers sell out quickly.

The draw takes place at the Teatro Real de Madrid in Madrid and is broadcast live on Spanish TV channels and on the internet from 8am - the draw starts at 9am. The first ever El Gordo took place in 1812 in the city of Cadiz, but since 1814 it has taken place in the capital. The numbers are picked out of two massive spheres and sung out by students from the San Ildefonso school - the entire draws takes about 3 hours. To help you gauge the size of the giant drums, 100,000 small wooden balls, each printed with a 5 digit ticket number are placed in one of them. A laser is used to mark the numbers and the balls are all exactly 19mm in diameter and weigh 3 grams each. The second drum has the prize amounts. 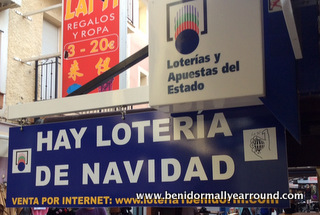 Over the last few years Benidorm has sold a number of the big prize tickets and people tend to then flock to those outlets thinking of them as lucky. They will proudly be displaying a certificate identifying them outside and will generally have even bigger queues...but don´t leave it too late to buy yours as they do sell out.