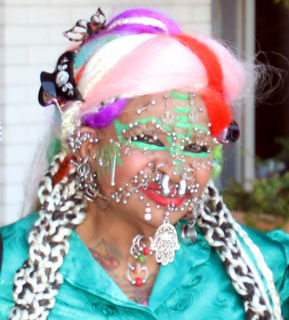 Elaine Davidson, Guinness World Record Holder for being the most pierced woman in the world is here in Benidorm… and turning quite a few heads! In total she has over 10,000, most of which she does herself – all except those that she cannot physically reach, such as on her back. Originally from Brazil, she is a bit of a nomad, traveling around the world extensively, but Edinburgh in Scotland is where she calls home…. “I just loves men in kilts” she mischievously giggled!

This is her very first visit to the region and she has fallen in love with the landscape – the sea on one side, rugged mountains behind and today in particular, beautiful blue sky and sun…. something generally lacking in Scotland she told me. 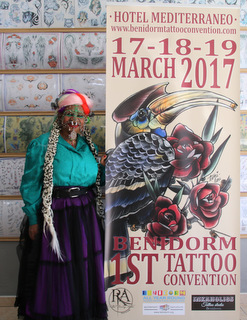 Despite people’s initial preconceived ideas about what Elaine is like, made purely on her appearance, she is a composed yet delightfully astute lady, who will chat with everyone. She takes her position as a Guinness Record Holder very seriously and does not drink any alcohol, neither smokes or takes any recreational drugs… the only thing which she is addicted to is spreading joy. Elaine is here for the Tattoo Convention, a three day event starting on Friday at 11am in the Hotel Mediterraneo. She will be performing a few jaw dropping stunts and you will be able to meet, chat and have a photograph taken with her over the course of the event.