Should Benidorm have a dress code? 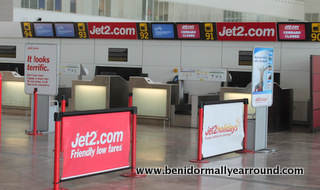 Much was made in the British press of a group of 18 hens – in their 30’s and 40’s heading to Magaluf this week, who were removed from a Jet2 flight for wearing what the airline deemed “Offensive T-Shirts” with the phrase ‘Bitches on Tour”. The Bride-to-be claims no-one spoke to her and was visibly upset by the entire episode – probably more embarrassed that the entire nation, including her employers were reading about it.

In this day and age, is the word ‘bitches’ really offensive? 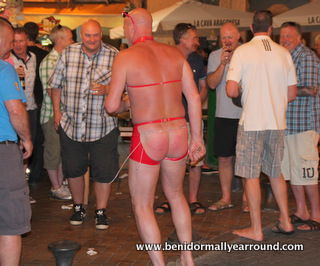 Primary school children are now addicted to smart phones and tablets and I am certain that they see and hear far more derogatory and insulting language. Listen to the lyrics and watch some of the videos accompanying chart hits aimed at the younger audiences and they are far more disturbing, with young girls then wanting to emulate their idols. 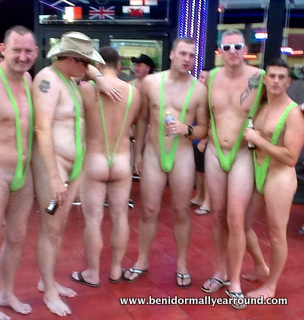 Jet2 replied that ‘as a family friendly airline we will not allow people on board if they are using or displaying offensive language’. Should the same also apply to towns, cities and holiday destinations? Anyone that has been to Benidorm cannot fail to be shocked and appalled at some of the sights we see walking about the streets. Granted it is a holiday destination – in particular attracting stag & hen groups such as the one’s that were evicted from the Jet2 flight, but should there be some kind of dress code?

However, the issue with this is two-fold: First who would police it and secondly, what one person finds acceptable or funny another finds offensive. 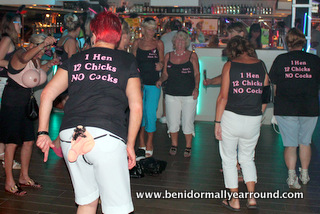 Many party groups have t-shirts printed, with details of the bride, groom, birthday persons name and ‘Benidorm’ with the year splattered across it. Others opt for a themed fancy dress night, dressing up as cartoon characters for instance. These are all fairly innocent and fun and I don’t think many have an issue or take umbrage to them. 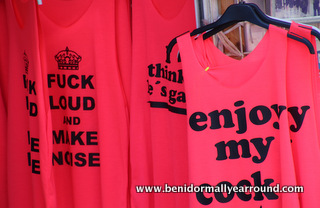 But then there are always those that push the boundaries, displaying their bits, which may be fine on the beach but not on the streets. Would they do that back home I ask? Sadly it is not just the holidaymakers though - shops here even have t-shirts on full display to passersby, with language you wouldn’t really want your children seeing, or having to explain the meaning to.

Likewise, the number of so called 'cabaret bars' on Calle Gerona and in The Square with boards outside advertising live sex-shows really does bring down the tone of the area, giving it a sleazy image, but as it is not illegal, there isn’t much that can be done to stop it. 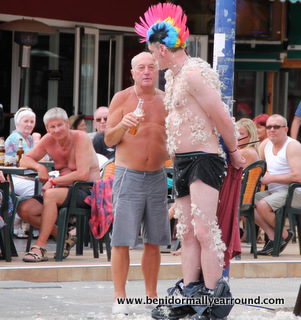 Yes Benidorm is predominantly reliant on tourism to survive BUT not at the expense of all others. Continue coming, have fun, have respect for others but most of all, have respect for yourself. Would you feel proud and comfortable if your mother, grandmother or daughter saw your antics? If not, then you probably shouldn’t do it...

-1 #4 Jen 2017-09-07 10:21
It's disgusting.
Why do people act like that do they act like this in there country?
It's cheap and tacky. Benidorm has deffo went down hill. Big style! Full of thugs drunks can't hold there drink. Greedy fat men who think waving a British flag makes them superior in May i add SPAIN who cares where you come from everyone on Spain mixes
Why have flags in pups and the names English might add as not British bars because there English bars?
Why do they do it.... people know you ate English when come holiday and will come in a 2nd eat. Personally I wouldn't we go holiday to holiday in Spain with the spanish.

We stay well clear of the Englishy part.

Those dodgy t-shirts you see for sale are ok to laugh at, but see enough of them and people start dressing like it. I say it's the shops which would be the primary source to focus on. Stop them selling offensive material. Benidorm is a great resort and it would only be better if brought up a notch or two. :)

As I walk around, I'm concious that I'm always wondering what the Spanish think of some of the English people - how they behave, how they dress. You just don't see Spanish people like that. Step it up, people!
Quote
+4 #2 Sheila Fearon 2017-06-04 08:23
There are some terrible things on tshirts seen around the area. Lots of shops selling babygros with the phrase My Father is a Motherf@@@@r on them! Who in their right mind would put their baby in that
Quote
+1 #1 Christopher L Moran 2017-06-04 07:19
Yes,they ought to take a leaf out of sitges book.Zero tolerance of people with no tops on out with the beach and no disgusting foul language t shirts etc
Quote
Refresh comments list