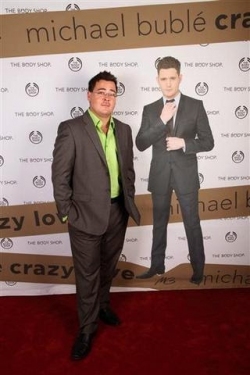 There are some fantastic tribute acts which you can watch while here in Benidorm and you will certainly find something for all tastes and ages. But there is one guy who is that good he is actually signed to one of the top celebrity agents in America - "StarTalent Inc" in NYC and is the worlds official No 1 Michael Bublé impersonator.

That guy is Kriz K - and when he isn´t performing around the world on his tours you can catch him right here in Benidorm, at "Stardust" on Calle Gerona every Wednesday and Thursday night!

Kriz has been living here for just over a year, moving with his wife and children from Essex in the UK - and being a keen golfer he couldn´t have chosen a better place! He plays in the Costa Blanca Golf League and told me that he has an impressive handicap of 12... well it sounds pretty awesome to me but then I know nothing about golf!

His life has always been filled with music - he had singing lessons at the age of 4 and as a schoolboy was in the globally recognised St Paul´s Cathedral choir. He showed great talent and appeared alongside Phillip Schofield in "Joseph and his Amazing Technicolour Dreamcoat" at the Hammersmith Apollo in London.  He was heavily into music, his forte playing drums as well as other instruments and fronted bands, playing in his local area. He went on to become a music teacher, which he did for 3 years but left to become a session singer and musician, working alongside many top names and was the support act for "JLS" on one of their tours.

After some years he digressed and started singing Jazz & Swing, covering The Rat Pack legends Frank Sinatra and Dean Martin before adding some Michael Bublé numbers -  and so finding his vocation, going from strength to strength. He doesn´t just sound like Mr Bublé, he totally becomes him when he is on stage with his mannerisms.

Kriz told me that he recently saw Michael Bublé on the Ant & Dec show and he was wearing a sequined jacket, so he went out and got one too - the only difference being that MB´s was from Armani costing nearly five thousand whereas he picked one up at Zara for 99 euros! I did see those some months ago and wondered what sort of man would wear a jacket like that .... well now I know! He has released an album "Judge Me" featuring some of his most popular and frequently requested songs - available from his website:
www.kriz-k.com

If you are in Benidorm pop along to Stardust and hear for yourself - Im sure you´ll be blown away.