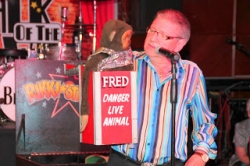 Comedy duo Rikki Stevens and sidekick Little Fred - you can´t mention one without the other, have been playing to a packed house since arriving in Benidorm back in 2000 and he hasn´t looked back or ever regretted the move.

"Nothing gives me greater pleasure then putting a smile on peoples faces and making them laugh" he told me... and he certainly did that last night when I went to watch him at "Talk of the Town", where he performs exclusively at 10.15pm every night.

Originally from Kilmarnock in Scotland he sold everything up, hooked up a caravan to his transit and drove over with only 300 GBP in his pocket - and it´s testament to his talent that he still pulls in the crowds every night. When he arrived he walked into Valentines and was offered a job there and then - unfortunately it was the 1am slot, or as Rikki referred to it, the graveyard shift! 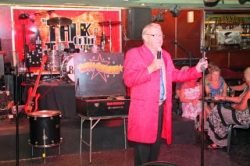 Rikki has been in showbiz since the age of 17 when he was part of a group called "Cobbled Road", performing pop covers of popular artistes to audiences across Scotland. The 4 piece group then changed the name to "Scotch Mist" and became more of a comedy band and were famed for their "coffin act". Rikki would be bought on stage in a coffin, yes really and then one of the other band members would pour a tiny bit of acetone on the lid and set it alight. It literally burnt for a few seconds as there wasn´t enough to catch the wood and Rikki would jump out singing the Elton John classic "Funeral for a friend/Love lies bleeding" number. Unfortunately one evening the measuring cap for the acetone had got lost so a brandy glass was used instead.... Rikki said he could smell the acetone which started leaking inside as it was being poured and he was banging on the lid for it not to be lit, albeit on deaf ears. Well the crowds certainly got a bang that night and poor Rikki got somewhat singed from the experience. During this time he also worked as a film extra and for 4 years was DCI Jim Taggart´s driver in the popular Scottish detective series - bet you are all going to get those old dvd´s out now. 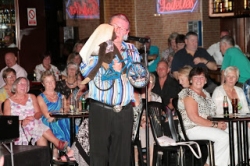 He then decided to branch out on his own as a comedian, doing the entertainment circuit and introduced Fred as a prop for his Michael Jackson routine - but when all the controversy broke about the singers personal life he was "put to bed". But during the mid 90´s whilst working at Butlins alongside Roger De Courcey and his accomplice Nookie Bear, the ventriloquist encouraged Rikki to use Fred again - and as they say, the rest is history! During his years he has worked with many famous names including drummer Eric Delaney, Sunday Night at the London Palladium comedian Johnny Hackett and in recent years Chrissy Rock, who really made her name after her appearance in the hit comedy series. He certainly gets a lot of ideas and material from the show for his performances.

I found it really quite funny when Rikki told me that while working at the Comedy Club, back then it was called "The UK Bar" he received a letter from the Animal Rights League about the fact that he was using a monkey in his performance which was not being looked after properly... you couldn´t make it up could you! He purchased the original Fred 17 years ago from John Menzies for the princely sum of 10 GBP - and he is living out his retirement at home with Rikki and his lovely wife Mags.... who incidentally he met here in Benidorm. He makes reference to her during his show, but don´t believe a word about how he describes her - you´d think she was a cross between Ena Sharples and Ann Widdecombe but she is gorgeous and very glam. He is on Fred number 3 but now has to source them on the internet, generally getting them sent over from America. 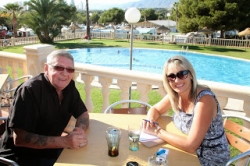 Audiences have changed over the years but he endeavours to keep up to date with current issues to incorporate into his 1 hour show. It is a long time to keep the audience enthralled, but he certainly manages it with ease.

It is a show suitable for all ages, which is evident when you look at those sat captivated, giggling and nodding in agreement at his witty remarks. He still loves Benidorm as much as when he first arrived here - the relaxed lifestyle and obviously great weather have something to do with it, but it also helps with his COPD. His days of smoking certainly didn´t help and during his youth told me that he could have resurface the M6 with the amount of tar on his lungs... always cracking jokes even at his own expense! Thankfully he has cut down and the smoking ban in clubs has made it a more pleasant environment to work in. So does he go and hit the nightlife after work I asked.... no, straight back home to unwind and relax before hitting the pillow.