The Merseybeats at Benidorm Palace 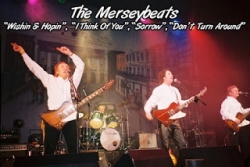 Next Sunday, 3rd November the legendary 60´s pop phenomenon "The Merseybeats" will be performing at Benidorm Palace - and I mean the real ones not a tribute band which are the norm here!

I had the privilege of talking to Tony Crane, the original founder member of the group during the week and admitted straight away that I hadn´t even been born when they formed, instead growing up with the Bay City Rollers and Osmonds - but he didn´t hold that against me!

When they formed in 1961 the group were called "The Mavericks" for the first 12 months. Billy Kinsley was still at school and Tony worked at the Royal Liver Building. The group played the lunchtime session at the Cavern Club on Monday, Wednesday and Friday, two 45 minute slots alternating with The Beatles! Tony use to run there in his lunch break to do the slot - and they soon became the resident band alongside The Beatles, who being older took them under their wings! Bob Wooler at the Cavern didn´t like the name and decided to change it to The Merseybeats, but as there was a newspaper called Merseybeat they had to ask permission and ended up adding an "S" to the end. In those early days the Cavern club didn´t even have a drinks license so customers use to drink pop.

When the group first formed they were a 4 piece but by the 70´s, with the emergence of technology they added keyboards and became a 5 piece. Billy left the band for a while at the beginning of the 70´s and formed his own band, Liverpool Express and they were a huge hit in South America but then he came back to The Merseybeats. 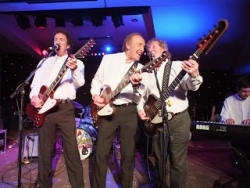 Tony plays lead guitar in the group and I asked if he was always musical - as a child he played trumpet in the school band after hearing Eddie Calvert, who was often referred to as "the man with the golden trumpet". So how comes he ended up playing the guitar I bet you´re wondering, like I was. Well, Tony had 6 sisters and they took him to the cinema to watch Elvis in "Love me Tender" and when he saw the legions of women attracted to him and his guitar he decided he´d have a go and away went the trumpet!  The group will be bringing 4 guitars with them to Benidorm Palace for their show - obviously not travelling on Ryanair then!

So of all the hits that the band had what are his favourites - each hold a special memory for Tony. The 1966 hit "Sorrow" they first recorded at the Beatles Abbey Road studio and George Harrison loved it so much that he used part of the lyrics at the end of "Yellow Submarine". David Bowie picked it as his all time favourite song and did a tribute version of it as did Status Quo. Sorrow was probably the most successful but Tony´s personal favourite is "Don´t Turn Around". In 1964 "I think of You" stayed in the charts for nearly a year and became the groups biggest selling song despite it only reaching No 3 in the charts - but that was most probably because The Beatles had the No 1 and 2 positions at the same time! 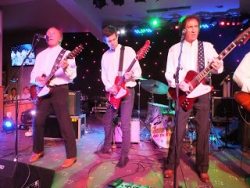 The group still tour to this day and every year endeavour to do a 50 day tour around the UK, often with other bands such as The Searchers, Gerry and the Pacemakers and Wayne Fontana. Last year they also toured abroad, travelling to Finland, Denmark and Germany whilst next year they are off to the USA. They played on the QE2´s last sailing to Dubai and have done all the big cruise ships to exotic places such as Kuala Lumpur and the Seychelles. In the 90´s Tony even opened up his own club down in Benalmadena on the Costa del Sol , calling it Mersey Beat and for about 4 years commuted back and forth around his band commitments, but it proved too much and so he sold it.

Before going on stage he ensures he has his supply of "Vocal Zones" - little black sweets which lubricate the vocal chords. Tom Jones recommended them to him years back on hearing Tony trying to clear his throat backstage before a performance and they are a requisite for most singers. Mike Pender of The Searchers even borrowed a zone, as they call them, off Tony once when he ran out!  I hope that he doesn´t forget them when he comes here. The group are on a very early flight on the day of the show, not being able to fly out the day before as they are performing down on the south coast on Saturday night. They are still very much in demand and so it is a great coup that they are coming to perform here.

But then maybe the fact that Tony and Christine are very good and dear friends from their days back in the Wirral,where Tony still lives may have something to do with it too! It is a fantastic opportunity to see and hear some true 60´s legends, which regardless of age I am sure you will have heard of as so many artistes have done their own covers of the classics.