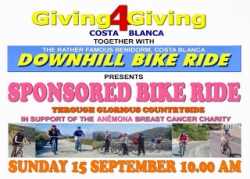 Local cancer fundraiser Gary, from the Giving4Giving charity shop in La Nucia has a very special day planned on Sunday 15th September  - a Downhill Bike Ride! Don´t worry if you do not have one either - they can be provided free of charge thanks to the generosity of "The Downhill Bike Ride" company who are sponsoring the event.

ALL money raised will be going to Anémona - a Benidorm based breast cancer charity located just off the Avd Ruzafa in the Old Town. Gary has sponsorship forms available which he can either email or arrange to drop off to you (they are also available at the charity shop in La Nucia) - there is no registration fee to take part.... the aim to just to raise lots of money for Anémona. Contact Gary on 603 137 697 if you would like to take part and to book your bike if you need one.

The meeting point is at the Font del Moli up in Finestrat, at the foot of the Puig Campana mountains - which offer breathtaking views and a magnet for walkers and bikers. 35 bikes are available - plus helmets, so not having one is no excuse Im afraid! Two big minibuses with trailers will transport you and the bikes back to the start point at the end of the 20 km adventure, which will end at the Amadorio resevoir near Orcheta. Throughout the estimated two and a half hour ride one minibus will ride at the head of the bikers and another at the back for safety. Regular rest and refreshment stops will be made throughout the route.

Afterwards there will be a fun afternoon at the "Orange House" in Finestrat - for those not brave enough to participate in the bike ride head there from 1pm onwards. An Argentinian bbq will be provided by Don Fuego SL offering a selection of delicious meats to keep the hunger at bay and you will be entertained by some fabulous acts such as the ABBA tribute and Jolene Goodwin. Jeanette will giving a Zumba demonstration and there will be lots of craft stalls for you to browse through selling cards, handmade soaps etc so don´t forget to bring your money.

Sam, the owner of the Orange House has a treat for the adventurous - you will be able to do some tree climbing from a specially rigged up tree at the front!  All in all it sounds like it´s going to be a great family afternoon and a bonus that it is raising money for a very worthy cause. A limited number of spaces are still available if you would like a stall - contact Sam at the Orange House on 686 044 003.

Good luck to all those taking part and lets hope the sun shines... but not too much in the morning for the bikers.