The beaches in Benidorm are positively heaving with holiday makers and it is almost impossible to find a patch of sand to lay your towel down unless you are a real early bird. Those wanting front line position close to the waters edge stake their place by 9am - generally the Spanish or other foreign visitors. Most young Brits are still sleeping off the heavy drinking session from the previous night or families are trying to navigate their way around the breakfast buffet offering back at the hotel.

But there is discord down on the beaches, particularly on Levante as holiday makers complain that too much space has been allocated to the company hiring out sunbeds and parasols. The council have received numerous complaints that there is little free space available for those that do not want to rent a sunbed but instead use their towels or own sunbeds instead. Even though demand for the service has declined since last year the number of beds on offer, and the space that they occupy  - which amounts to 40% across the Levante and Poniente beaches, has remained the same. 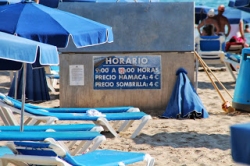 The issue is even more prevalent on the Levante beach, where 4,600 sunbeds are available to hire across 10 separare zones specifically allocated to the companies which rent them out. The quieter Poniente beach has a total of 1,700 beds available. The daily charges, which operate between 9am and 7pm are 4 euros for a sunbed and 4 euros for a parasol - no discount if you have both! If you are a couple on holiday and decide to hire a sunbed each plus one parasol for the week, it will add an extra 84 euros to the cost of your holiday - quite a substantial amount I think you will agree. Imagine if you were a bigger group...

Most of the complaints received are critical that many of the sunbeds are empty and taking up space which could be used to accommodate more people who are sitting squashed together in the so called free zones. It really is difficult trying to find some free space where you won´t be listening in on other peoples conversations!

In addition, Levante has other designated areas for the library, inflatable sea platform pay kiosk, volleyball pitch and pedalo hire (which costs an eye watering 23 euros per hour for the ones with a slide) eating up valuable space for the sunbathers. Mind you, Iam sure that each of these businesses has to pay some sort of licence fee to the council to operate, so unlikely that they will be freeing up any valuable sand!