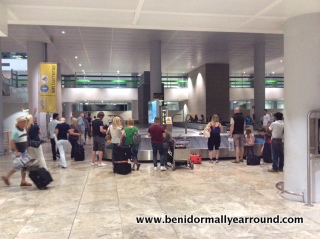 With the somewhat questionable British weather this Bank Holiday weekend, holidaymakers are flocking to Benidorm in their droves. With the central heating going on in many UK homes it is no surprise to hear that figures released by comparison site "TravelSupermarket" show a 164% rise in the number of Brits heading this way. The airport arrivals is full and busy, welcoming excited holidaymakers to a week of sun and fun!

What attracts people to Benidorm? 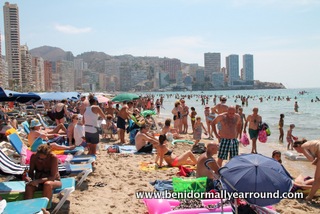 With its close proximity to the UK, it comes as no surprise that many choose Benidorm as that ideal getaway destination. Although the Costa Blanca in general is 44% down on last years figures, the holiday resort of Benidorm is bucking that trend and attracting them by the thousands. Yesterday, José Manuel Soria, Spanish Minister of Industry, Energy & Tourism announced that July was the second best month ever in Spain, with Benidorm the most sought after destination in the country! Throughout the month of August, the resort is packed – and adding to the international visitors, many locals from Madrid drive across to the coast. Data provided by the Department of Transport showed that between 1st July and 17th August a staggering 1.8 million cars entered Benidorm! It is no surprise that Benidorm is dubbed the tourist capital of the Costa Blanca. 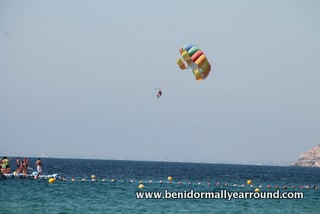 The sister Costas – Dorada and Brava are both experiencing a downward spiral in visitor numbers (55% and 32%) as is the neighbouring Balearic Island of Ibiza, which is 68% down on last years figures. So what attracts so many here? The wonderful golden sandy beaches, which Benidorm is fortunate enough to have four of - Levante, Poniente, Mal Pas and La Cala is probably the key draw. There is plenty to keep you amused on them too – if you are adventurous then there are a great deal of watersports such as cable ski, jet ski and kayaking to try, but most just want to relax and take in the rays.

Facilities for disabled in Benidorm 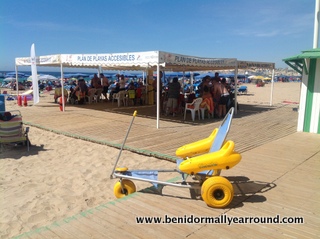 The council even have special facilities on the beach for the disabled, with access from the promenade to a sheltered awning. Allocated staff are on hand to help and they even have specially adapted water tricycles, which they take you in down to the sea. Much though has gone into making Benidorm accessible to all, for which the Town hall much be congratulated upon. There are also beach libraries – one on Levante and another on both Mal Pas and Poniente where you can borrow books, read newspapers and even charge up you mobile phones free of charge! Bet that Blackpool or Brighton don´t have facilities like that.

Nightlife is No 1 attraction to Benidorm 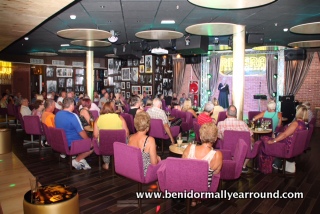 There are an incredible 5 theme parks here if you have had enough of the beach – but for the young, and also not so young, the cheap affordable booze on offer is the main attraction. Partygoers and Stag & hen groups flock here for 3 night weekend breaks – they don´t even need to go far. Many stay on the same street, namely Calle Gerona in the Rincon de Loix, which is packed full of bars and clubs and open into the early hours. Most offer free entertainment and often entice people in with offers of free shot, but the cheap beer – often only 1.50€ for a pint is what most are after.