Benidorm has an amazing array of talent and entertainment on offer - you can find something to suit all ages and tastes which is what makes it so incredible and probably explains why visitors keep coming back. Where in the UK can you get entertainment of this standard for free every night?

One group that stands out as it appeals to virtually everyone, no matter what generation is "One Vision". They are a four piece group made up of Emma Louise Dickenson, David Wenzel, Darren Coulton and Mark Harty.

I bet you are wondering who is who ... well Emma Louise surprisingly is the girl in the group! Mark is the one with the red mohican - although he did tell me that it changes colour regularly (and is torn between green or blue for the next time), Darren is the blonde bombshell which leaves David as the last one in the group (he´s the one with the shaved head!)

I met up with the group for a coffee and chat during the week and whilst together we were approached numerous times by people thanking and telling the guys how much they enjoyed their show - and thats exactly what it is, a full on production show. The foursome have a great rapport together and that is reflected on stage as well as off.

One Vision is the brainchild of Mark and the group have been going for 5 years - Emma Louise has been with them for 4 of those and I was surprised to learn that she replaced Asa Elliott from the original lineup when he left to pursue other projects. Darren is the newest member, having been with them for just over a year, but they have such a close and harmonious relationship that you´d think they had known each other since childhood.

The group are not a Queen tribute band but a group that was formed based on the West End hit musical "We will Rock You" and all songs which they perform are in it. They regularly swop and add new songs to their show to maintain interest - there are some that they still haven´t used, especially as many holidaymakers come and watch the show night after night at Morgans Tavern. The musical is touring around Spain at the moment therefore the One Vision show is also attracting lots of Spanish people. 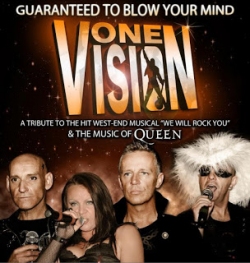 All four of them are singers and entertainers ( by profession Darren is a dancer) who have worked the Summer season at the top tourist destinations and also on numerous cruise liners. They are exclusive to Morgans Tavern (which is Neptunes Bar in the ITV comedy) where you can catch them at 11pm every night - except Wednesday when they have a much deserved night off and they also do 3 nights - Monday, Thursday and Saturday at the UK Comedy Bar at 10pm. If you want a more intimate environment then go to the Cabaret Bar - at Morgans its a full production rock show with stage, lights and shoulder to shoulder crowds. I was there to watch and they certainly get the crowds going - everyone had their arms raised and were clapping when they sang "We will Rock You". David and Mark also work as a duo under the name "Smart Move" 3 nights a week - it´s a cabaret show which you can catch at "Talk of the Coast" and "Sandra´s" at 10pm.... then the pair have to run down to Morgans afterwards - and they say entertainers have an easy relaxed life!

They are currently working on a new 80´s show called "Stand and Deliver" which will feature all the classics from the era by the likes of Frankie goes to Hollywood, Eurythmics, Adam and the Ants and many more which they plan to launch around September time. They never seem to stand still - only last Sunday they were sharing the stage of Benidorm Palace with the 60´s pop band "The Searchers". They were approached by the UK promoter and all said what a fabulous experience it was and in the future will be doing more shows at Benidorm Palace as a support act. They are popping over to the UK for a week in November on a "busman´s holiday" as One Vision, they were wanted for longer but have commitments here - I certainly hope that they don´t get poached whilst there!

They four get on so well together that they even meet up during the day.... it certainly is one big happy family with this group. As they are so busy working they rarely get to go back home which for Emma Louise is in Chesterfield, for David Harrow in London, Darren is from the entertainment capital of the UK - Blackpool and Mark is from South Wales.
I look forward to watching their new 80´s show later this year - well the 80´s are my era music wise... good luck to you all and if you go and see them, they certainly will "Rock You"!
If you want to follow them they are on Facebook under One Vision - musician/band.

0 #1 shalom 2014-07-13 03:37
Can you please help me.me and my boyfriend tardy Spencer,comedia n from south wales are going to benidorm 4th Nov 2014 and we are friends with mark and David,smart move.can you let them know or give me contact details please.thanks.
Quote
Refresh comments list