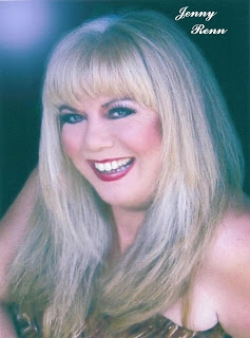 The clubs and bars in Benidorm offer every type of entertainment you could imagine, from tribute acts to dance shows, comedians to singers.... then there´s the Legend, Sticky Vicki - I don´t know where or how to classify her! It caters to all tastes and ages - I defy anyone to say they are bored and can´t find something they enjoy.... but the best part is that they are all FREE to watch! Anywhere else in the world you would be charged an entrance fee at least. OK, the drinks are slightly more expensive but then the entertainers have to be paid.

I must admit I haven´t even seen a fraction of what Benidorm has to offer, often the case when its on your own doorstep. But someone who stands out is Jenny Renn - in the main because she is a female comedienne, which is rather unusual in that profession... and secondly because she is one voluptuous lady.  I met up with Jenny and she had me in stitches from the moment we met... she´s certainly a tonic if you´re feeling a bit down or having a bad day - its like having a shot of laughing gas.
Originally from Liverpool, Jenny moved to Benidorm nearly 14 years ago, never having been here before. She had a friend that worked here and by chance her agent rang to tell her she had been offered a 3 month Christmas contract at Steptoes. Everything would be paid for - flight, accommodation etc so it was a no brainer Jenny told me, plus the fact that she knew somebody here her response was a definite yes. At the end of the 3 months they offered her a permanent contract, but due to family commitments back in the UK she had to return back. The following Christmas she was once again back at Steptoes on a 4 month contract, and it is then that she met Peter Warke who was also working there, and was eventually to become her husband.
She clearly recalls the life changing moment when she decided she wanted to live here - March 1999, sitting at La Cala with Peter, overlooking the beautiful bay sipping a drink. This was the life and so she went back to her native Liverpool to sort things out and came back to her beloved Benidorm.... where she happily remains. Jenny would be talking about something serious one minute then come out with "Did I tell you about..." and then have me rolling around.
She has always been in show business and worked as an entertainer on the cruise lines when she was younger.  She must certainly have good sea legs as she has done over 40 and been all over the world on some of the big named liners. When she first docked here, she started at the "Rich Bitch Show Bar" working alongside Gary Brown, aka Miss Jordan Rivers (winner of the recent "Come Dine with Me" Benidorm special) where she remained for nearly 4 years. She then decided to go freelance, enabling her to be more flexible as to the days she worked - it was hard work 7 nights a week back in those days.
8 years ago she and Peter went back to Wigan where they tied the knot in front of family and friends, returning as Mr & Mrs. I asked Jenny where she got her inspiration and material from - it must be difficult trying to find new ideas, but she said in the main its just talking to people. I wonder whether I would hear any reference to me if I was to turn up at one of her shows! Her one remaining ambition is to write a sitcom, which she has already started pencilling. Going by my afternoon spent with her it certainly won´t be a short on humour.
Apart from her evening gigs, Jenny is also heavily involved with many local charities and fundraisers (she did the Alzheimers Gala last week)- the one closest to her heart is MABS, a Cancer Support Group. Although fortunately never having been affected herself, she does know people who have been. Every Wednesday morning she helps out at the drop in centre in Albir, next to Mercadona. Whether an actual sufferer or someone who is supporting a family or friend, everyone is welcome. Jenny does what she does best, puts a smile on someones face and if only temporarily, makes them laugh and forget their illness.
Jenny is currently working on her Christmas show, which involves Mother, not Father Christmas. She also writes her own parody´s (comical satire) and incorporates them into her routine. If you would like to catch Jenny she is on 3 nights per week at Tommy´s - 8.30pm Tuesday, Friday & Sunday and every Wednesday at Legends on Calle Londres at 10.30pm.
Good luck Jenny and well done for all the selfless charity work you do.

0 #1 Carol harvey 2015-11-12 17:50
Saw jenny at rich bitch show,it was about 10 years ago when I saw her there for the first time,great to see her again ,fantastic LADY
Quote
Refresh comments list