ITV Daybreak goes to the Indoor Market in Benidorm. 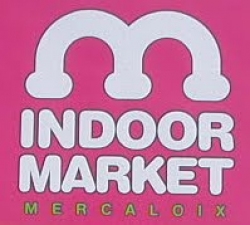 On Thursday afternoon the crew headed to the Benidorm Indoor market, located at the Rincon de Loix - already a favorite of  residents and holiday-makers when in Benidorm.

The first stop was at Goldies Hair Salon ...... what can I say about Goldie - he's a legend here in Benidorm and everyone knows him! Goldie has been in Benidorm for 25 years cutting and colouring - and he's a real character. Back in London he worked in the television industry  and has styled many celebrities in his time. From the moment he picks up those scissors there's not a dull moment - which Steve found out when he sat in the chair covered in a leopard print apron. He just gave him a little trim (the

previous client came in brown and left blonde with pink, green and blue tips) and so a relieved Steve made his way to the next stop .... the Dream Feet Foot Spa for a Garra Rufa foot pedicure. Here, along with some burly volunteers they sat with their feet in tanks of water while the Garra Rufa fish feasted on their dead skin cells .... yum! It was certainly a new experience for Steve - just not sure if he'll be repeating it looking at his anxious expression!

Once he was all done we headed off to the Old Town by taxi in search of "Grannies Tea House" where Poly was waiting to put the kettle on! The Tea House is a traditional piece of England where you can have a nice pot of tea and scone amongst many other things. It took some time to film the sequence of filling up the teapot with boiling water and pouring into a cup but eventually got there for Steve to enjoy that long awaited brew! Todays filming will be broadcast on Tuesday at 6.45am British time. On Friday the crew will be following a family on holiday around Terra Mitica, the Cable Ski ride on Levante beach, Aqualandia and finishing off in Altea Old Town and 10 hours of filming will be edited down to 1 minute and 20 seconds for broadcasting on Monday! If any of you were at the Benidorm series shoots you'll know how long it takes to film each piece and what is actually used on screen - a very long and arduous process.